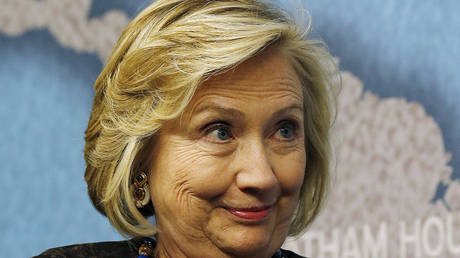 Hillary Clinton is being called out for promoting equal pay on Twitter while simultaneously using a female journalist’s graphic design work without credit or payment.

The former presidential candidate used an illustration by British data journalist, Mona Chalabi, to highlight the pay discrepancies between people based on their race and gender.

The former senator’s tweet aimed to celebrate the Paycheck Fairness Act, a bill which the House of Representatives finally passed on Wednesday (22 years after it was first introduced) in a bid to close the gender pay gap.


Clinton’s tweet, which has been ‘liked’ almost 30,000 times, called to “make equal pay a reality” but ironically failed to credit Chalabi for her illustration, which the latter first shared on Instagram in April 2017. On Thursday, Chalabi thanked the former presidential candidate for featuring her piece, but pointed out that she, too, has been undervalued for her work.

Thanks for using this to illustrate your incredibly pertinent point. I made this image and – ironically, given the topic – I rarely get credited and never get paid for its use. https://t.co/0UIU4eih2R

Despite Chalabi’s ‘clapback’ tweet garnering an even greater response of 33,000 ‘likes’, at the time of writing Clinton has yet to credit the artwork or recognise the journalist’s post asking for clarification.