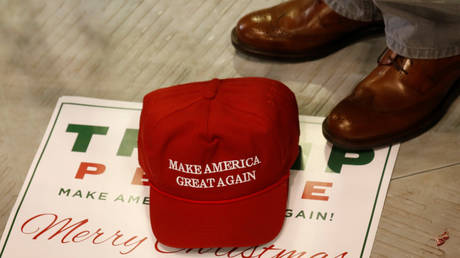 A California restaurant has been flooded with bad reviews after the owner said he won’t serve customers wearing MAGA hats, comparing it to the swastika and a KKK hood. His since-deleted tweet sparked massive backlash.

“It hasn’t happened yet, but if you come to my restaurant wearing a MAGA cap, you aren’t getting served, same as if you come in wearing a swastika, white hood, or any other symbol of intolerance and hate,” Lopez-Alt wrote in a since-deleted tweet, as reported by the San Francisco Chronicle.

The chef, who describes himself as a “feminist” and an “atheist” in his Twitter profile, did not stop at that. In a follow-up post, also deleted as of now, he said that the red MAGA caps “are like white hoods except stupider because you can see exactly who is wearing them.”


Lopez-Alt was referring to the preferred uniform of Ku Klux Klan, which includes a white robe with a white hood that covers the face. Equating the red hat with the KKK hood has recently come into vogue on the political left in the US.

The attack on MAGA hat-wearing diners may not be an impulsive one. One of the latest posts on the restaurant’s own account is the retweet of former President Barack Obama’s New Year wishes, which call for action to enact change on local level.

Lopez-Alt has since removed all the traces of his MAGA-denouncing speech from his account, but not before stirring up controversy online, drawing both praise and condemnation.

While some on Twitter argued that it was all a publicity stunt, others have suggested boycotting the restaurant – or turning up there for a MAGA hat-wearing flash mob.

Perhaps we need to have a #MAGA flash mob? (or just simply red hats) show up outside the restaurant eating @ChickfilA ?? (that would make for a great viral news video) #PreachTolerance not hate.

Owner of Wursthall Restaurant & Bierhau in San Mateo, CA will not serve anyone in a MAGA hat. Okay all MAGA folk who don’t wear hats…DON’T eat there.

Some have asserted the equivalence between the San Mateo restaurant and a Colorado baker, who refused to make a custom wedding cake for a gay couple citing his religious beliefs. The couple complained to the state, which fined the Christian cake artist, spawning long-running litigation that eventually reached the US Supreme Court. Siding with the baker in June last year, the court argued that the man was exercising his First Amendment rights when he denied the service.

Meanwhile, the restaurant’s page on both Facebook and the review site Yelp have been inundated with negative reviews accusing the owner of bigotry and politically-motivated hatred.

Some of the bashers took a bit more creative approach in their criticism of the place, making it seemingly non-political.

“Worst restaurant I have ever been in. Cockroaches all over. Cold food. Rude staff. I give it a -5 stars,” a recently posted FB review says.