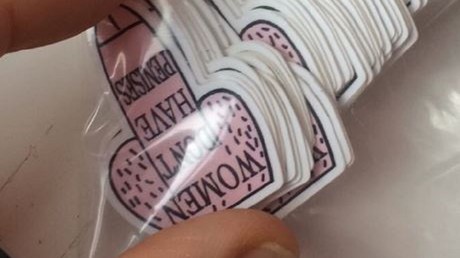 Whether a woman has a penis or not is usually not up for debate. Yet it now seems to have polarized the public, as stickers insinuating females do not have male genitalia have been plastered across a beach in Liverpool.

The phallus-shaped stickers have been stuck on some male sculptures – crafted by Angel of the North creator Antony Gormley – on Crosby Beach. They bear the statement: “Women don’t have penises.”

The stickers were put up by members of Liverpool ReSisters, who said they want to raise awareness about the “potential threat to sex-based rights and women’s rights” posed by proposed changes to the Gender Recognition Act.

Just as in other countries of the EU, including Ireland and Portugal, the legislation would allow for transgender people to achieve legal recognition without a medical diagnosis.

Liverpool ReSisters defended its stunt on the basis that girls need their own spaces to fend off “male violence and harassment in public and in private space.”

“Women don’t have penises. This is not hate speech, it is not transphobia, it is a simple statement of biological fact,” according to a press release.

The Mayor of Liverpool condemned the act by what has been branded the ‘TERF’ (trans-exclusionary radical feminist) group and said police were investigating the incident to find those responsible.

I am not aware of the group, we will remove stickers and work with the Police to identify those responsible. Remember though,Liverpool takes #PRIDE in its diversity and history of fighting for equality for all, we love all our Trans residents and all our LGBT community😘😍🙏 https://t.co/YJdsA6uXXo

The stickers sparked a fiery debate on Twitter, with some people saying it is “ludicrous” a police investigation was opened over a “truthful” statement.

It seems ludicrous to me that a truthful sticker saying women don’t have a penis is considered hate speech and is currently being investigated by Liverpool police? #StickerWoman

While another said it is unfair to label “women who are afraid of female erasure transphobic.”

Please don’t shut down debate about gender recognition by calling women who are concerned about female erasure transphobic. You can have respect and love and support equality for the trans community while also recognising the problems that arise from self identification.

But opposition to the group over its “disgusting” stickers far outdid the support.

One called the plastering of sculptures mere “vandalism,” while others slammed the stickers as “nasty garbage.”

This is stupid vandalism. Nothing to do with your ’cause’. Which is also stupid. Have you got nothing better to do? Sad sad people.

How dare you deface beautiful local art with your transphobic, innacurate, nasty garbage? Liverpool is a city of love and openness, and your vile views are not welcome here. Trans people on the other hand, will always be welcome. Jog on.

Others pointed out the ReSisters’ campaign stems from their struggle to redefine themselves.

Or the inevitable response from women who are being forced to reconceptualize how we define ourselves.