A purse bought at an Arizona Walmart came with a letter, purportedly from an inmate at a Chinese prison who communicated 14-hour workdays with no break and threats of violence for unfinished labor.

The $25 bag, purchased at a Walmart in Sierra Vista, Arizona, came with a note hidden deep within a zippered pocket, according to Christel Wallace, who bought the purse earlier this year. Wallace found the note months later, in March, according to the Arizona Daily Star. Laura Wallace, her daughter-in-law, then took the note and posted it on Facebook in late April.

The author of the letter wrote of “inmates in the Yingshan Prison in Guangxi, China” who work “14 hours daily with no break/rest at noon, continue working overtime until 12 midnight, and whoever doesn’t finish his work will be beaten.”

The inmates are underfed and underpaid, the writer added, and medical costs are deducted from their paychecks.

“Being a prisoner in China is even worse than being a horse, cow, sheep, pig or dog in the US,” the note says, according to a full translation by the Huffington Post.

A Walmart spokesperson has asked Wallace to contact the company in order to help “verify the letter’s authenticity,” Huffington Post reported.

“[W]e take allegations like this seriously,” said Ragan Dickens, Walmart’s director of national media relations. “With the limited information we now have, it is difficult to verify the letter’s authenticity.”

The company told the Daily Star that the global retail giant has strict requirements for its suppliers.

“I can tell you that one of our requirements for the suppliers who supply products for sale at Walmart is all work should be voluntary as indicated in our Standards for Suppliers,” a spokesman said.

The note should be exposed for the public’s consideration, Laura Wallace told KVOA.

“I don’t have the means or the access to help in any way. So I think this was my way of putting in my two cents,” Wallace said. “I don’t want this to be an attack on any store … That’s not the answer. This is happening at all kinds of places and people just probably don’t know.”

Yet, much is known about the common exploitation of prison and slave laborers around the world who supply corporate retailers with cheap goods. The director of China Labor Watch told the Daily Star that Walmart’s sheer size and reach make the company one of the most notorious benefactors of involuntary work. 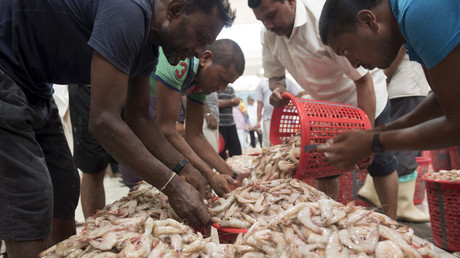 “Walmart are bad actors in the situation,” Quiang Li said. “They set a very bad example for the other companies.”

In the US, discontent over unpaid and under-paid prison labor triggered a nationwide prison strike in September that included more than 24,000 inmates in at least a dozen states, according to strike organizers. Inmates protested a host of problems facing the incarcerated population, such as the low wages they receive for involuntary work that benefits the facilities where they are held and a long list of private companies that contract out labor to prisons.

The 2016 prison work stoppage – planned to coincide with the anniversary of the Attica uprising in 1971, a seminal moment for the prisoners’ rights movement in the US – became the largest such strike in US history.