Four of the eight hopefuls running for mayor on the primary ballot in Detroit, Michigan have criminal convictions. Two were charged with assault involving guns. The candidates say their past motivated them to run for office.

One of the contenders, Donna Marie Pitts, 58, has multiple felony convictions. In 1987, she was convicted for her involvement in a shootout with the owner of an auto clinic over a repair bill.

A jury convicted Pitts of assault with intent to do great bodily harm. She served about four years and eight months and was paroled on June 1, 1992, according to the Michigan Department of Corrections. 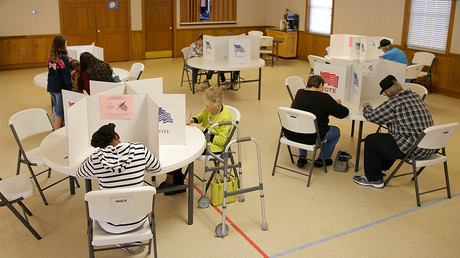 Under a March 2003 plea agreement, Pitts was convicted of firearm possession and carrying a concealed weapon after she was stopped by police for an improper plate and failure to wear a seat belt.

Pitts disputes many of the allegations in each criminal case, saying she was discriminated against, according to the Detroit News.

She told the outlet that if elected she will combat “discrimination and racism” and advocate for an overhaul of the justice system.

Another candidate, Danetta L. Simpson, 46, has a 1996 felony conviction for assault with intent to murder. The incident stemmed from a complaint made by a woman who’d been living with the father of two of Simpson’s children.

The woman said Simpson pulled up at her house, screamed at her and fired a gun, striking part of a doorway about two feet from where the woman was standing.

Simpson pleaded no contest to the charges on the day of the trial. She later tried to withdraw it, but her attempts failed.

“I was a wrongfully convicted felon, overcharged for a crime I did not commit,” said Simpson, a mother of four, alleging that the witness in the case “lied.”

She said her interaction with the criminal justice system has fueled her desire to seek public office.

Articia Bomer, 45, was charged with carrying a concealed weapon in 2008. She was sitting in a parked car when police approached her.

Upon searching her vehicle, they found a .38-caliber pistol with four live rounds. Bomer said the weapon was not hers, and that she had just purchased the vehicle.

She called her conviction frivolous and wrong.

“I want voters to know that they should never judge a book by its cover,” Bomer told the Detroit News. “I am a law-abiding citizen.”

Curtis Christopher Greene, 32, was charged with a felony at age 19, for delivering and manufacturing marijuana in 2004.

A year later, he was arrested and charged with writing and publishing a fraudulent check, court records show.

Greene has since earned a marketing degree and written three books. He told the Detroit News that his past continues to hold him back, that he struggles to find employment, and wants to implement programs that will help ex-offenders like himself who face similar challenges.

Under Michigan election law, convicted felons can vote and run for office as long as they are not incarcerated or guilty of certain fraud-related offenses, or crimes involving a breach of the public trust.

The two mayoral candidates who are now polling ahead of the field – incumbent Mayor Mike Duggan and state Senator Coleman A. Young II – have no criminal records.

Last year, a study found Detroit among the world’s 50 most violent cities. Three other US cities made the list as well. Excluded from the survey were those with no reliable crime statistic available, as well as cities in war zones.