US envoy to the UN Nikki Haley visited the Colombia-Venezuela border to announce a $9-million aid package for refugees there. She took the opportunity to muse on the ouster of Nicolas Maduro, days after an assassination attempt.

While on a visit to Colombia to endorse the newly elected President Ivan Duque, Haley also traveled to the border with Venezuela. There, she announced a $9-million aid package for refugees crossing over into Colombia. She posed for a photo with one of the children seated on her knee, and tweeted a call to oust Venezuelan President Nicolas Maduro.

RT @USUN: Thousands of people escape Venezuela every day, walking hours in the heat over this bridge, simply to get a meal or medicine for their families. Due to the corrupt Maduro regime, Colombia is now home to a million Venezuelans on any given day. #MaduroMustGopic.twitter.com/J8Tc65O3s7

“Due to the corrupt Maduro regime, Colombia is now home to a million Venezuelans on any given day. #MaduroMustGo,” she tweeted.

Hundreds of thousands have fled Venezuela’s economic agony – a fact the US is using extensively in its passes at Maduro. As the country faces hyperinflation, Washington is hitting it with sanctions and urging its allies to do the same. US President Donald Trump has even reportedly considered military intervention and some US media outlets have openly called for a military coup. 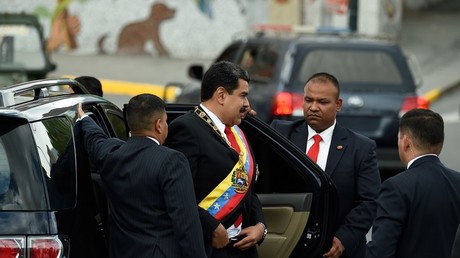 Haley has repeatedly defended Washington’s own questionable policies on migrants, warning the world that nobody can tell the US how to deal with refugees. Migrants abroad are apparently fair game, however, since they are escaping a Washington-designated tyrant and aren’t trying to enter the US.

The latest proclamation of humanism by Haley comes days after Maduro was targeted in an apparent assassination attempt by several explosive-laden drones. The Venezuelan president claimed to know that those behind the attack were linked to Colombia and resided in the US. Both countries deny any involvement.

American officials are no strangers to parachuting in with a show of support for the oppressed when they feel a nudge is needed to rile up sentiment against a government they don’t like. During the 2014 Maidan coup in Ukraine, Assistant Secretary of State Victoria Nuland famously went on the ground among protesters to hand out snacks and smiles.