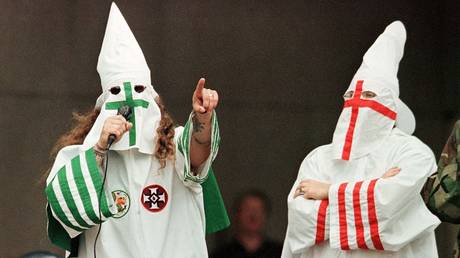 An influential group of Tory Brexiteers, who were selected by PM Theresa May to attend a crisis Brexit meeting on Sunday have attracted a bizarre new nickname: The Grand Wizards, according to the BBC’s political editor.

The band of powerful Conservative MPs and ministers, which includes Boris Johnson and Jacob Rees-Mogg, met May at her country retreat, Chequers, in a bid to rescue her maligned Brexit deal.

In the wake of those crunch talks and critical votes in the house of commons on Brexit, Laura Kuenssberg, the BBC’s political editor made reference to the “‘The ‘Grand Wizards’ (the new name for the Chequer’s daytrippers apparently)” on Twitter.

2. The ‘Grand Wizards’ (the new name for the Chequer’s daytrippers apparently) also had another meeting this morning, were they discussed again whether they could get on board to back PM’s deal and there was no firm conclusion

What may have escaped Kuenssberg, ostensibly did not escape others on social media, who highlighted the connection to the racist group, the Ku Klux Klan. The white supremacist group, founded in the United States in the 19th Century, referred to their national leaders as the Grand Wizard.

Former UK Chancellor George Osborne, now editor of the Evening Standard, tweeted: “Is this for real?” The Guardian’s political sketch writer claimed the ETG had “come out of the closet” to name themselves the Grand Wizards.

“So we are a bunch of senior, white, right-wing men. Can anyone think of any possible unfortunate connotations with the phrase ‘Grand Wizard’”.
*silence and furrowed brows*
“Nickname accepted!” https://t.co/me9uwPox4l

In case you missed it – the ERG have rebranded themselves “The Grand wizards” which is also a term used by the KKK.

One imagines that the Ku Klux Klan will be mortified https://t.co/NftIt9tMr7

Many mocked the strange moniker for the Brexiteers, with one Twitter user @teaforpterosaur suggesting a fictional shortlist of group names they may have formulated before opting for the KKK title.

Steve Barclay, a former Brexit minister in May’s government, and who attended Chequers, has denied the offensive title is true, insisting “it’s not for real.”

just catching up on timeline, for avoidance of doubt, couple of insiders told me using the nickname informally, no intended connection to anything else

Kuenssberg clarified her tweet shortly afterward, claiming that for the “avoidance of doubt,” ‘insiders’ had told her they were using the “nickname informally, no intended connection to anything else.”