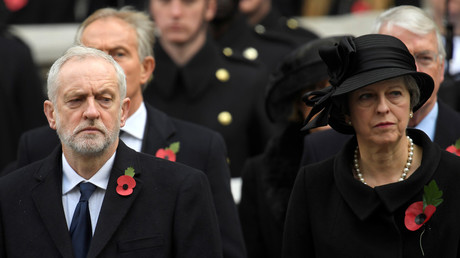 Jeremy Corbyn attacked Theresa May after she updated MPs on Brexit, with reports that the issue of the Irish border is proving to be a huge sticking point for the EU 27. The Labour leader called the statement ‘groundhog day.’

May announced that, following intense negotiations, the EU stated they have agreed to consider a UK-wide backstop. Their original proposal was a backstop plan for Northern Ireland-only.

There had been hope among British officials that a deal could have been agreed on Sunday, but that soon dissipated as the contentious issue of the Irish border once again scuppered proceedings.

The EU’s ‘backstop’ proposal, which would see Northern Ireland stay within the customs union, albeit temporarily, has been proving to be a barrier to any deal being struck, with the Tories’ hard-Brexit faction opposing any extension of the customs union.

It comes as the prime minister prepares to attend a critical summit of EU leaders on Wednesday. The meeting is being billed as ‘make or break’ time for May, not only in relation to striking a Brexit deal, but also concerning her leadership.