A former House IT aide who had access to emails and files of dozens of Democratic lawmakers has been indicted on four counts, including bank fraud and engaging in unlawful monetary transactions.

Imran Awan, 37, an information technology (IT) aide who worked for Rep. Debbie Wasserman Schultz (D-Florida) and dozens of other lawmakers in the House, was indicted on four felony counts Thursday, according to court documents obtained by the South Florida Sun Sentinel.

Wasserman Schultz, the former chairwoman of the Democratic National Committee (DNC) who was forced to step down over Wikileaks revelations that she worked against Vermont Senator Bernie Sanders’ 2016 campaign in favor of Hillary Clinton, fired Awan on July 25.

The indictment charges Awan and his wife, Hina Alvi, 33, who also worked as a congressional IT aide, with making false statements on an application to obtain home equity lines of credit on two properties they rented out. Awan and Alvi allegedly sent the money to unnamed individuals in Pakistan.

According to the indictment, the couple obtained two home equity lines of credit in the amounts of $165,000 and $120,000 from the Congressional Federal Credit Union (CFCU). The couple allegedly made false statements that the properties were their primary residences, when they were actually renting them out.

The couple then allegedly transferred $283,000 of those funds to two unnamed individuals in Faisalabad, Pakistan.

“It was further part of the conspiracy that Awan and Alvi then transferred the funds obtained from those home equity lines of credit to individuals in Pakistan by directly initiating a wire transfer of those funds from Alvi’s checking account at CFCU to Pakistan,” the indictment states.

When the CFCU office called Alvi to inquire about the transfer, Awan answered the phone and “pretended to be Alvi,” according to the indictment. At first, Awan said the funds were for “funeral arrangements,” however, when he was further questioned, he changed his reason to “purchasing property.”

That same day, Alvi applied for a financial hardship withdrawal from her thrift savings plan in the amount of $202,859, according to the indictment. Alvi allegedly stated that the funds were needed for “medical expenses,” and Awan signed a withdrawal form and had it notarized. That money was then used to pay off the balance of the home equity line of credit at CFCU. 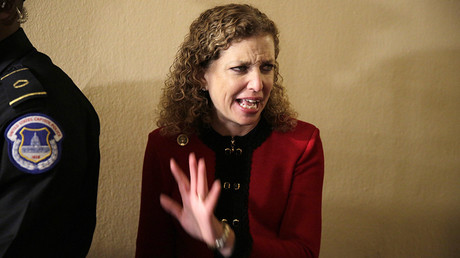 The indictment comes a month after Awan was arrested on bank fraud charges as he attempted to board a plane to Pakistan at Dulles International Airport.

Bill Miller, a spokesman for the US Attorney’s Office for the District of Columbia, told the Daily Caller that Awan pleaded not guilty and was released “pursuant to a high-intensity supervision program,” which required him to wear a GPS monitor, remain confined to a 50-mile radius around his home, abide by a curfew, and surrender all of his passports.

A criminal complaint obtained by Politico states that Alvi previously took a plane to Pakistan in March with her three children.

According to the Daily Caller, Awan and other family members worked for various members of Congress for years and has raked in at least $4 million since 2009.

Upon learning that there was an investigation into Awan and his family in February, several members of Congress immediately fired them. However, Wasserman Schultz decided to keep Awan on her payroll and blocked the Capitol Police from searching a laptop that was confiscated in connection with their probe, according to the Daily Caller. Wasserman Schultz did not fire Awan until he was arrested last month.

In an interview with the Sun Sentinel, Wasserman Schultz said she did not fire Awan because she thought he was being persecuted as a Muslim.

“I had grave concerns about his due process rights being violated,” Wasserman Schultz told the Sun Sentinel. “When their investigation was reviewed with me, I was presented with no evidence of anything that they were being investigated for. And so that, in me, gave me great concern that his due process rights were being violated. That there were racial and ethnic profiling concerns that I had.”