Downing Street must use Nigel Farage as a “conduit” to Donald Trump, as he is the only British politician with real links to the president-elect’s administration, new UKIP leader Paul Nuttall says.

Speaking exclusively to RT, Nuttall said UK Prime Minister Theresa May and her government had “called the US election wrong,” resulting in Farage being the only way for Britain to build relations with Trump.

“They were positive that Hillary Clinton would be elected and therefore they have opened the door for Nigel Farage to be the only British politician to have real links into the president elect’s administration.”

“I call on Theresa May and the government to use Nigel Farage as a conduit to ensure that the special relationship between Great Britain and the United States not only continues but prospers into the 21st century,” he added.

Farage is the first and only British politician to meet the president-elect after his shocking victory. May is yet to meet Trump, but has spoken to him on the phone.

The former UKIP leader has repeatedly offered his services as an intermediary between May and Trump, but Downing Street has declined.

Among his political promises as the new leader of UKIP, Nuttall says he will hold the government’s “feet to the fire” to ensure the country is given a “real Brexit” and not the “mealy mouthed” version May is planning.

Nuttall, who has served as the party’s deputy leader for six years and is a member of the European Parliament, says that a “real Brexit” means Britain must get out of the single market, control its own borders, sign its own trade deals, and make all of its own laws. 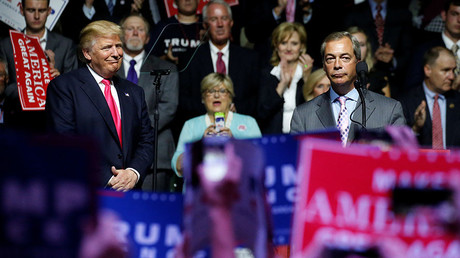 “It’s what the people voted for,” he says.

Britain’s post-Brexit economy may face a “rocky road” over the next few years, but “short-term pain” is needed for there to be “long-term gain,” Nuttall says.

He said once the country gets past a possible period of economic uncertainty, “Britain can become great again.”

“Once we get beyond that, and Britain starts signing trade deals across the rest of the world and stops looking inwards at a slow growing bloc that is the European Union and begins to look outwards to emerging markets in the East, Britain can become great again.”

“We can become a very strong economy, and I think we will be a beacon of light to other countries in the European Union. I think after Brexit you might end up with a Frexit where France leaves, Dexit with the Danes, Nexit with the Dutch,” he added.

“I do believe that Brexit is just the beginning.”

Nuttall says he wants “UKIP to be the anti-establishment movement in the UK.”

“People feel left behind. They feel cut off with the political process. They feel like they have nothing in common with the elites and what is happening is there is a kickback.”

Farage had returned briefly as interim leader of UKIP in October when his chosen replacement, Diane James, stepped down after just 18 days on the job, citing a lack of internal party support.