The British Ministry of Defence (MoD) attempted to censor a document showing it has assassinated people outside of armed conflict zones using drones, it has been reported. The government is now under pressure to come clean.

The ministry removed a passage from its report on drone use, titled ‘Joint Doctrine,’ which was published in September 2017, according to the Canary. In the report, it acknowledged that critics have raised concerns about the legality of unmanned and remotely piloted aircraft missions and their potential for misuse. 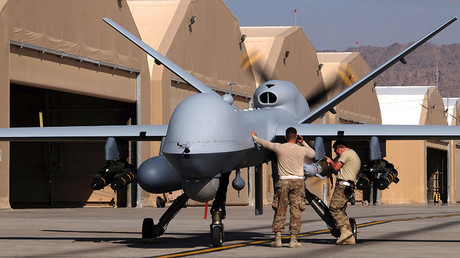 The MoD acknowledged it was targeting people outside of war zones, and said arguments against drones “may also arise from the recent UK practice of targeting suspected terrorists outside of the armed conflict itself, and the meaning and application of a state’s right to self-defence.”

This passage was missing, however, in the updated doctrine that the department uploaded late last year. Scottish National Party (SNP) spokesperson Stewart McDonald wrote to the MoD in December about the issue.

Minister of State for the Armed Forces Mark Lancaster responded by saying that the September document contained “erroneous drafting.” He claimed the report had “misleadingly” noted that MoD policy was to use drone strikes outside of armed conflicts.

The head of human rights organization Reprieve said the government appears to be in “complete chaos” over the issue. Head of Reprieve’s Assassinations team Jen Gibson told the Canary: “We had a long overdue, official document saying the government have a ‘practice’ of killing people outside of armed conflict zones.

“And now we have a minister claiming there is no policy at all and their own document was ‘misleading.’ The public has a right to know the government’s policy on taking lethal strikes in our name,” she said.

Leaks have revealed that drone strikes have an appalling record in terms of accuracy. During one five-month period of a US operation in Afghanistan, for example, nine out of 10 people killed in airstrikes were not the intended targets.