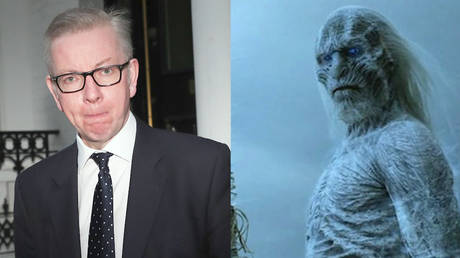 Gove, a ‘stark’ supporter of the leave campaign in 2016, quoted the HBO series when discussing the potential consequences if May’s EU Withdrawal Bill is defeated in the House of Commons.

“If we don’t vote for the deal tonight, in the words of Jon Snow, ‘winter is coming’,” Gove said on BBC Radio 4, citing the dramatic motto which predicts the coming of a frozen army of the undead, unleashed to destroy all of humanity.

Gove went on to reiterate that a vote to reject the deal would damage British democracy, and cause ‘Leave’ voters to feel like their wishes have been disregarded.

“I think if we don’t vote for the deal tonight we will do damage to our democracy by saying to people we are not going to implement a Brexit, and the opportunity that all of us have to live up to our democratic obligations is clear.”

May is expected to be voted down by her own MPs in the House of Commons on Tuesday night. Early predictions estimate that more than 100 of her own backbenchers will vote against the deal, giving way to the biggest defeat in 95 years.

2016:
“There will be no downsides to brexit, only considerable upsides”

2019
“A horde of regenerating ice zombies will march on us until we’re all fucking dead” https://t.co/Fha9hdZGSj

Gove himself refused to predict a victory for May, saying the real risk is that a defeat could mean Brexit won’t be delivered.

“We know there are people in the House of Commons and outside who have never made their peace with this decision, who want to overturn it,” the minister said.