Everyone fidgets…except maybe for those guards in front of Buckingham Palace. Whether it’s touching your hair, biting your nails, playing with your clothing or spinning pens in your hands, you probably fidget many, many times a day. Herein lies the reason why the fidget spinner has become the latest toy craze among children..and even adults.

It’s called a fidget spinner because it can spin and allows you to do what you normally try not to do: fidget. The toy looks like a cross between a ceiling fan and the head of a triple headed electric shaver. This Buzzfeed video shows how you can put it between your fingers and spin it to occupy your hands:

As you can see, the fidget spinner is not exactly the most complex of inventions, although it gives a whirring sound while it spins. And fidgeting certainly is not a new human behavior. Find someone who doesn’t fidget at all and you’ve probably found someone who’s gotten full-body Botox. Therefore, the fidget spinner’s price premium ($15 on Amazon) over other common fidget objects such as pens, pencils, balls and coins probably isn’t due to massive research and development costs. Nonetheless, some retailers have made claims that the fidget spinner has health benefits such as easing stress, post-traumatic stress disorder (PTSD), anxiety and attention deficit hyperactivity disorder (ADHD). How legitimate are these claims? 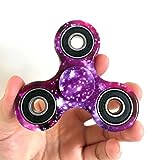 Reviewing the science behind the potential benefits of fidgeting may make you fidget, because there are theories but limited concrete scientific evidence. One thought is that fidgeting may occupy parts of your brain that otherwise would distract the rest of your brain with random thoughts. Imagine that your brain…