Congressman Adam Schiff (D-California) has become something of a media darling over the last year. Cable TV news shows have been eager to book the Democrat to hear his views on alleged collusion between Donald Trump and Russia.

Now Republicans are hoping that the decision to shut down the House Intelligence Committee’s probe into supposed Russian meddling in the 2016 election might provide the added bonus of Schiff spending less time on television.

“It’s not shocking that the person most upset by the outcome had used the investigation to launch his TV career,” Republican National Committee (RNC) spokesman Michael Ahrens told the Washington Examiner.

Angered by the decision to end the investigation, Schiff said that Democrats would release their own findings, including a list of leads and witnesses that should be followed up. 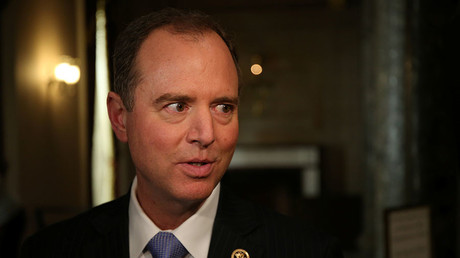 A report released by the RNC in February found that Schiff had given a whopping 227 television interviews since Trump’s inauguration. Republicans also frequently accused Schiff of leaking details of the committee’s work to the media. The report described Schiff as a “day-to-day, hour-to-hour fixture on cable TV news.”

Now that the GOP-led House probe has been concluded after finding “no evidence of collusion,” Schiff might have to find something else to do.

“If Schiff stopped going on TV to talk about his Russia collusion conspiracy theory, he’d free up an unbelievable amount of time,” one Republican official said. “Maybe he could use it to track down who killed Jimmy Hoffa or chase UFOs.”

Rumors abound that Schiff has set his sights on even greater fame, however. A story in Politico last year claimed the California Democrat could use the Russia probe as a springboard to run for a seat in the US Senate.

Last month, Fox News mocked Schiff for allowing himself to be interviewed by RT back in 2013. Fox host Tucker Carlson joked that prolific Russiagater Schiff must now be regarded as a “key player” in the supposed Russian conspiracy against the US.

Even more ironic was that Schiff used his RT appearance to discuss his efforts to reform the process whereby the FBI and other agencies can acquire warrants to spy on Americans – an effort that obviously didn’t have much of an effect, given that the FBI later relied on information contained in a dossier paid for partly by Hillary Clinton’s campaign to obtain a warrant to spy on Trump foreign policy adviser Carter Page.

Schiff rejects the idea that he spends too much time on television. He made the denial during an interview on CNN.

House Intelligence Committee concludes its investigation with its final report – there was no Russia/Trump collusion. Adam Schiff placed on suicide watch, now that his TV career may be over. #HouseIntelligenceCommittee

Adam Schiff needs a safe space to crawl back to now that his TV appearances may dry up. What a sad excuse for a legislator. https://t.co/mCt6zXXh28