The Senate majority leader has admitted that the GOP may have to work with Democrats to support existing insurance markets if they cannot form a majority to rewrite the Affordable Care Act. Republicans have, meanwhile, been buying up insurance stock.

“If my side is unable to agree on an adequate replacement, then some kind of action with regard to the private health insurance market must occur,” Senate Majority Leader Mitch McConnell (R-Kentucky) said Thursday at a Rotary Club luncheon in his home state.“No action is not an alternative. We’ve got the insurance markets imploding all over the country, including in this state.” 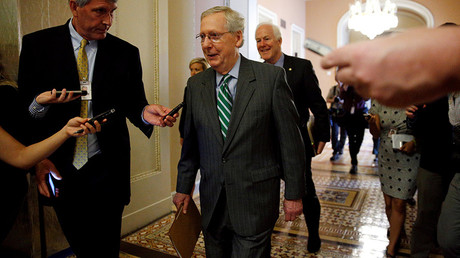 It was McConnell who pledged in 2014 to repeal and replace the Affordable Care Act (ACA, better known as Obamacare), as did House Speaker Paul Ryan (R-Wisconsin).

At least a dozen Republican senators, however, have publicly opposed or expressed some reservations about the healthcare bill rewrite, which forced McConnell to postpone a planned vote ahead of the 4th of July holiday recess. The bill will fail if just three of the 52 GOP senators vote no.

The Senate version of the bill, the Better Care Reconciliation Act, would eliminate the ACA’s requirement that people prove they have health coverage, would repeal or delay billions in taxes imposed under the current law, and would make long-term deep cuts to the nation’s Medicaid program.

The dissenting Republicans argue that the cuts to Medicaid are too deep, hurting rural providers and shortchanging efforts to combat the abuse of drugs like opioids.

McConnell’s suggestion to bolster the insurance exchanges created under Obamacare is at odds with Republicans’ stance, which has for the last several months repeatedly claimed that Obamacare is “imploding” and “collapsing.” President Donald Trump has repeatedly said it’s “dead” and often cited the failing exchanges as the main reason to scrap the 2010 law.

The healthcare exchanges were designed for people without access to healthcare through employment – slightly more than 10 million Americans – who could purchase them through government-subsidized exchanges. More than eight in 10 Americans bought their plans through those federal subsidies.

Senate Minority Leader Charles Schumer (D-New York) on Thursday called McConnell’s statement “encouraging,” and said his caucus is “eager to work with Republicans to stabilize the markets and improve the law. At the top of the list should be ensuring cost-sharing payments are permanent, which will protect health care for millions.”

So far, there has been no outreach yet from GOP Senate leaders to their Democratic counterparts.

At the same time, however, several Republicans have been busy buying health industry stocks, the Intercept reported. Such purchases could raise serious questions of insider trading.

Documents show the wife of Representative Mike Conaway (R-Texas), added a health insurance company stock from UnitedHealth, worth $30,000, to her portfolio on March 24, as the lower chamber’s rewrite bill, the American Health Care Act, was advanced in the House Rules Committee.

Inhofe’s financial advisor made the stock transaction on his behalf and the stock purchase was routine and “made without the Senator’s prior knowledge or consultation,” Inhofe’s spokesperson countered.

Health industry stocks have grown as Republicans have debated the repeal effort. UnitedHealth has gained nearly 7 percent in value since March 24.