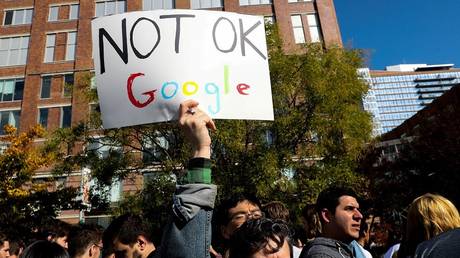 Recordings of an internal meeting to address Google’s sponsorship of a prominent conservative conference appear to confirm accusations the tech giant is biased against Republicans and also seeks to “steer” US politics.

On Thursday, Breitbart published transcripts of the audio from a meeting held last year by Google’s senior director of US public policy, Adam Kovacevich, to address the anger of some employees over the company’s sponsorship of the Conservative Political Action Conference (CPAC) in 2018.

Arguing that CPAC is the “premier gathering of sort of big-tent conservatives,” Kovacevich said that Google should be involved because “the majority of Googlers would want to steer conservatives and Republicans more towards a message of liberty and freedom and away from the more sort of nationalistic incendiary comments, nativist comments and things like that.”


Part of Google’s efforts to reach out to conservatives, Kovacevich argued, was to head off criticism from outlets like Breitbart, Daily Caller and Fox News, which are “actively pushing the storyline that Google is biased against conservatives.”

If that notion becomes accepted among Republicans and conservatives, he added, “that could be harmful to our mission of building products for everyone,” so Google needs to build relationships with not just lawmakers, “but also with the people who influence them” to head off harmful regulations.

If we want policymakers to help us when we have a bad bill or a regulation pending, we have to build relationships with them ahead of time.

Google does not agree with “offensive things that are said at the conference,” Kovacevich told the staff, referring to speeches by “outrageous figures” invited by organizers for the “sideshow circus-like element” of CPAC. He pointed out that at any event, there will be someone saying something Google disagrees with, bringing up the example of “your guys’s, one of your Senators, Elizabeth Warren” calling for a breakup of Google at a New America Foundation event in 2017.

The conference of an organization we support. Obviously we don’t support that position.

He told the disaffected employees that “at a certain point, our values are our values, right?”


“Google stands for inclusiveness, we stand for tolerance, we stand for building products for everyone and, if certain outlets don’t like that, we are probably going to be at odds with them perpetually, right?” Kovacevich said.

Google has not denied the authenticity of the leaked recording, according to Breitbart.