A Guantanamo judge has lifted a ban on military commission hearings at the island after an agreement was worked out with the Pentagon. The stay was issued after the prison commander banned the use of a separate boat to transport the judge to the hearings.

For years, judges presiding over terrorism cases at Guantanamo traveled across the bay from an airstrip to the courthouse in a small Coast Guard speedboat, instead of a ferry used by other visitors including 9/11 families, prosecutors, defense lawyers and reporters. The use of the separate boat was designed to avoid compromising the trail by keeping the parties separate.

In June, the Guantanamo Bay Detention Center commander abruptly banned the use of the speedboat, although the reasons were never made public, according to AP.

Gitmo judge on prison nixing fastboat: “Am I going to fly down on a prop plane because they don’t like a ruling?”https://t.co/WNRVrgq5IY

Army Colonel James Pohl and another judge presiding on a separate case said the ban interfered with their attempts to avoid mixing with witnesses and other case participants and could jeopardize attempts to ensure a fair trial. They said they should have been consulted before the ban and ordered future proceedings on indefinite hold.

On Wednesday, however, Pohl lifted the stay, after the Pentagon agreed to pay the Navy base $300 for a separate boat to ferry the judge and his staff across the bay to Camp Justice where the trials are heard, according to the Miami Herald.

The Pentagon’s “U-Boat proposal strikes the appropriate balance” between the prison commander’s “legitimate operational concerns” and the judge’s “interest in preserving the integrity of the proceedings and the independence of the Trial Judiciary,” Pohl wrote in his three-page decision issued Wednesday, according to the Miami Herald.

The hearing of five men charged in the September 11 case will resume on August 21. The men have been detained at Guantanamo Bay prison for over 10 years. They were arraigned in May 2012 on charges including terrorism and nearly 3,000 counts of murder in violation of the law of war.

If convicted, the five men face the death penalty. No trial date has been set. 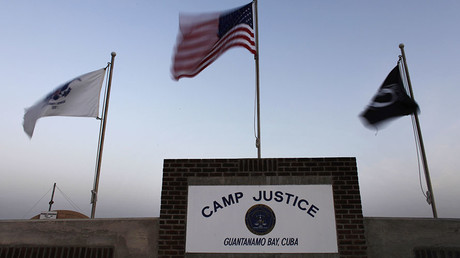 In April, a group of military lawyers who work at the Guantanamo Bay prison sued the Pentagon over work and housing areas found to have dangerous levels of known carcinogens. Over the 15 years they’ve worked at the site, at least seven people have been treated or have died from cancer.

In the lawsuit, they charged the US Navy with failing to properly investigate health hazards following reports of unusually high cancer rates at Camp Justice – the war court complex where legal teams work on the cases of alleged terror detainees, according to the McClatchy Washington Bureau.

Camp Justice, which houses the lawyers and their aides in trailers, is built upon a former airstrip that was a jet fuel dumping site and is surrounded by older buildings that contain asbestos.

The complaint claimed the Navy neglected to test 84 out of 100 units in the Cuzco trailers for formaldehyde. The presence of cancer-causing agents has long been a cause of anxiety among the military defense teams who represent terror detainees at the prison.