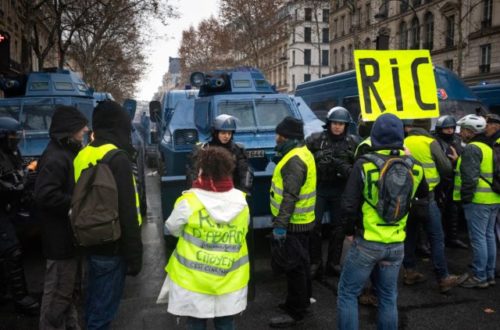 The illusion of democracy

The Gilets Jaunes movement took most observers and so-called experts in France and worldwide entirely by surprise, but it was actually completely predictable. The crisis simmered below the radars of France’s politicians, media, as well as those who considered themselves the enlightened figures of the intelligentsia for 50 years. By their sometimes raucous revolt, the Gilets Jaunes understand that the current democratic process is a farce, and that democracy itself has become an illusion. France is hardly an exception but more the rule in a system where citizens are not truly represented or even heard: a corrupt and opaque system, where most politicians are in the back pockets of global corporate interests which, despite campaign regulations, have found loopholes to rig elections through large money contributions and pseudo-neutral mainstream media coverage to influence public opinion. In France, the Macron administration should view the Gilets Jaunes and their bright yellow vests as thousands of irate canaries flying off a coal mine before an explosion. France’s new Sans-Culottes will not be satisfied any longer with crumbs, or even loaves of bread: instead they want control of the bakery. The Gilets Jaunes want more than money, food and stuff, they demand respect, dignity, and attention. The Vox Populi shall not be silenced! Not for trinkets or any price.

Lesser-of-two-evil elections in USA and France: dialectic of rejection…