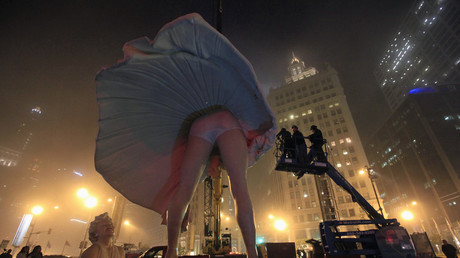 A giant statue of Marilyn Monroe is getting some residents in Connecticut hot and bothered after the sculpture was positioned with the icon’s underwear-clad rear directly facing a church.

The controversial 26-foot tall statue of the blonde bombshell was installed in Stamford Park this week as part of a citywide art display. However, the positioning of the Hollywood star in front of the First Congregational Church of Stamford got tongues wagging.

In a follow-up from earlier this week, the 26-foot Marilyn Monroe statue is drawing criticism because her, ah, bottom is directly facing a church. The word disrespectful was thrown around. Second photo is view from church, with a 200mm lens. #StamfordCTpic.twitter.com/Bl3lQGC3qR

The ‘Forever Marilyn’ statue, created by Seward Johnson, depicts the iconic scene from The Seven Year Itch where Monroe tries to hold down her white dress as air blows up from a subway grate. It has previously been displayed in a variety of locations in the United States, as well as in Australia.

The back of the statue, showing Monroe’s underwear, is clearly visible from the front of the church, which caused some consternation among the congregation.

“If God had something to say, he probably would’ve sent a bolt through it,” First Congregational member Michael Dagostino told the Stamford Advocate.

“It’s disrespectful to the church,” Pam Riley, another church member, told the newspaper. “Her skirt is up in the air and everyone’s under there looking up her skirt.”

Pastor of the First Congregational Church, Reverend Dr. Todd Grant Yonkman, described the piece as an odd artistic choice. “Marilyn Monroe was an artist deserving our respect. Why appropriate her image in this way. Is this the best we can do?”

“Maybe the city would let us give her some pants?”

An all too #stamfordct moment here and the christening of 26-foot tall Marilyn Monroe downtown. Attendees munch on bruschetta and sip wine. Homeless men around the park enjoying the new view. pic.twitter.com/Hte9lmiK5X

City officials have reportedly received several phone calls complaining about the statue, including reports of children climbing up the legendary sex symbol’s legs.

However, Sandy Goldstein, president of the Stamford Downtown Special Services District, which is hosting the exhibit, says the response to the art installation has been overwhelmingly positive.