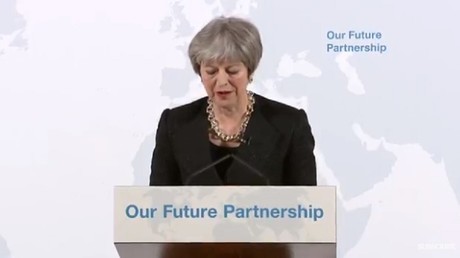 Theresa May has told the European Union (EU) she will not allow a Brexit deal to break up the United Kingdom. She also said it is time to ‘get on with it’ as she hinted anger at the conduct of politicians in Brussels.

Theresa May used the major speech to tell Brussels, London is ready to move forward in the landmark divorce.

Britain has been repeatedly accused of wanting to have its cake and eat it as it becomes the first nation to leave the EU. The UK wishes to keep access to the single market, while not accepting the four freedoms which come along with it. These are the free movement of goods, capital, services and – crucially – people, the latter point entailing open borders.

However, Theresa May pointed out all agreements are different. She said: “If this is cherry picking, then every trade arrangement is cherry picking.” She went on to tell the European Union it is time to “get on with it” while also hinting at her anger at threatened “walk outs” when talks get tough.

She said: “We are all still European and will stay linked by the many ties and values we have in common. It is only by working together we will find solutions which work for all our peoples. We will move forward by calm patient discussions of each others decisions.”

However, Labour mocked the speech, claiming it was very unclear. A statement said: “The Tories still have no answers to the questions facing the Brexit negotiations. Quite the opposite: the Government is paralysed by its own divisions.

“Our Brexit approach can unite our country & put jobs and living standards first – and the CBI agrees  #RoadtoBrexit.”

As Britain leaves the EU the PM warns she will not be forced into compromise politics at home for the sake of a trade deal.

So there’ll be no hardening of the boarder in Ireland according to British Prime Minister Theresa May’s speech.
Yet not one specific solution on how to prevent it.
The Brexit Fairy will magically produce the solution #RoadToBrexit#fluff&nonsense pic.twitter.com/TvxQTGvnJ4

In a long-awaited keynote speech at London’s Mansion House, she said both Britain and the EU had a joint responsibility to find a divorce solution. Any hard border or a customs border in the Irish Sea which would break up the UK’s common market would be unacceptable, she added. One of the major sticking points in the Brexit negotiations is what will happen to the border between the Republic of Ireland and Northern Ireland.

May said: “I have consistently put holding the Belfast Agreement [= Good Friday Agreement – Ed.] at the heart of our approach. We joined the EU together, 45 years ago and it is not surprising the decision to leave has caused anxiety. We don’t want to go back to a hard border.

“My personal commitment to this is clear; as Prime Minister I am not going to let our departure do anything to set back the historic progress we made in Northern Ireland, nor would I allow damage to the integrity of our precious union.”

May did eventually outline some of the things she wants. The PM’s shopping list includes the UK being an associate member of EU agencies, such as the European Aviation agency, similar to Switzerland. She ruled out both the Norway model and the Canadian one.

So Theresa May wants same economic benefit, no tariffs, membership of EU agencies, frictionless trade whilst outside the customs union and single market and not suggesting a solution on NI border. More chance of pigs flying and me playing up front for @SpursOfficial

On the Customs Union, Theresa May said we are leaving the club, but Britain will seek to create a customs partnership. Goods would cross the Irish border with strict rules – and no hard border.

Freedom of movement will come to an end, May said. The Prime Minister said our people will be “linked”. She said “businesses across the EU and the UK must be able to attract and employ the people they need,” but that the current unequivocal rights will change.

May set out five things the British are looking for, including “respecting the result of the referendum” and protecting jobs. She said: “It was a vote to take control of our borders, laws and money.”

The PM described the referendum result as “a vote for wider change, so that no community in Britain would ever be left behind again. But it was not a vote for a distant relationship with our neighbors.”

“Looking forward,” May went on, “the new agreement we reach with the EU must endure. After Brexit both the UK and the EU want to forge ahead with building a better future for our people, not find ourselves back at the negotiating table because things have broken down.

“We are all still European and will stay linked by the many ties and values we have in common. It is only by working together we will find solutions which work for all our peoples. We will move forward by calm, patient discussions of each others’ decisions.”