Controversial billionaire George Soros said Barack Obama was his “greatest disappointment,” who “closed the door” on him despite lavish support. He now eyes going bipartisan instead.

In a candid interview with the New York Times, Hungarian-born billionaire financier George Soros admitted that he became disillusioned with former President Barack Obama. Obama was “actually my greatest disappointment,” he told the Times’ Michael Steinberger. 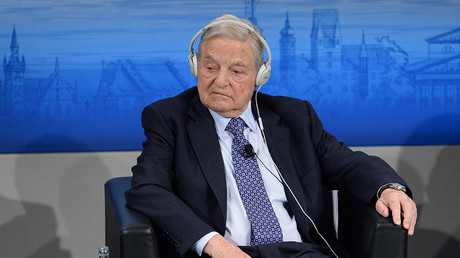 Soros said he had hoped Obama – who he heavily supported during the 2008 race – would seek his advice on finance and economics, but was instead frozen out.

After securing the presidency, Obama “closed the door on me,” Soros said. “He made one phone call thanking me for my support, which was meant to last for five minutes, and I engaged him, and he had to spend another three minutes with me, so I dragged it out to eight minutes.”

The liberal philanthropist said: “He was someone who was known from the time when he was competing for the editorship of The Harvard Law Review to take his supporters for granted and to woo his opponents.”

Soros said he does not want to be a Democrat and will not side with anyone in the American political system. “My ideology is nonideological.”

Still, he continued giving financial support to the Democrats beyond Obama’s term, pouring around $25 million into Hillary Clinton’s 2016 campaign to prevent Donald Trump from getting into the Oval Office, according to the newspaper. At that stage, he did not expect Trump to show much political ambition, but now he is afraid the president will “blow up the world rather than suffer a setback to his narcissism.”

Though Trump “would like to establish a mafia state,” his days in power are numbered, Soros believes.

Soros’ life as financier and freelance politician is mired in controversy, especially due to his operations in Europe. Hungary, where he engaged in a standoff with Prime Minister Victor Orban – once Soros’ protégé – recently closed the offices of the Open Society Foundations saying the entity encouraged illegal immigration.

In the UK, he is known to be a backer of a second Brexit referendum, donating over £800,000 (US$1,062,000) to pro-EU campaigns. The billionaire came under intense scrutiny after former UKIP leader Nigel Farage warned members of the European Parliament about Soros’ “truly extraordinary” influence on Brexit. The comments were made after it emerged Soros put $18 billion (£12.97 billion) into the Open Society fund.

The 87-year-old Hungarian-American is one of the world’s foremost investors. He also gained notoriety for shorting Britain’s pound sterling, which forced the currency’s collapse in the 1990s.