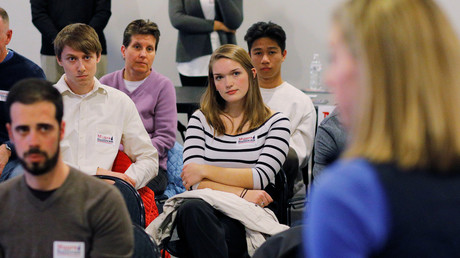 The Democratic Party is losing ground with millennial voters, all while their interest in the Republican Party is creeping up, according to a new poll.

The Reuters/Ipsos online survey of more than 16,000 registered voters in the 18-34 age category found that support for Democrats has fallen to 46 percent — a roughly 9 percent drop over the last two years.

Two out of three young voters said they did not like President Donald Trump, a Republican, but that did not always translate into a wider dislike of the GOP.

The share of young voters describing themselves as undecided or willing to vote for a third party — or even to not vote at all — is also on the rise, the survey found.

The decrease in support for Democrats was most pronounced among white millennials, who made up a majority of the millennial vote in the 2016 election.

Young white men in particular are now more likely to support Republicans by a 46 to 37 percent margin.

Maybe if Dems cared about Millennials, Millennials would care about them.

The new numbers will be worrying for Democrats, who rely on the millennial vote as they head into the midterm congressional elections in November. Democrats will need to win 24 seats to gain control of the House of Representatives.

Young voters can be a problem for both Republicans and Democrats because they are “not as wedded to one party,” Donald Green, political science professor at Columbia University, told Reuters.

When it comes to growing the economy, millennials are split fairly evenly, with 34 percent believing the Democrats have a better plan, while 32 percent favor Republican plans. Two years ago, that difference was 12 points in favor of the Democrats.

Well when you are a center-right neoliberal party that is beholden to Wall Street, that reflexively supports every single war, and that sabotages even the mildest attempts at progressive reforms, of course young people aren’t going to like you @DNChttps://t.co/kbrSpR0GzT

Both parties are planning to pull out all the stops to win the youth vote in November, including running social media ads, text message ads, ‘get out the vote’ campaigns and sending buses to college campuses to bring students to polling stations.

Commenting on the new poll, a spokesperson for the Republican party told Reuters that the numbers indicated that young people “like what they’ve seen” from the Republicans under Trump. The Democratic National Committee declined to comment.