Regular MSNBC viewers will be familiar with Rachel Maddow and her affinity for Russiagate speculation; but the conspiracy-happy host has finally gone off the deep end with her coverage of the Singapore nuclear summit this week.

On Tuesday’s episode of her show, Maddow launched an 18-minute long attempt to prove that the person who benefited most from US President Donald Trump’s nuclear summit with North Korean leader Kim Jong-un was actually Russian President Vladimir Putin.

Before she got down to the business of explaining how Putin secretly controlled Trump during the Singapore summit, however, Maddow had some very important news to impart to her viewers. This news was so important that Maddow spent the first three minutes of her segment building up to the big reveal.

With much fanfare, the intrepid MSNBC host revealed to the world – drum roll, please – the well-hidden fact that North Korea has, indeed, got a small border with Russia.

Now, of course, this was nothing that a quick glance at a map of the world couldn’t confirm in two seconds, but on The Rachel Maddow Show it was truly groundbreaking information presented almost as though Maddow herself had uncovered a huge geographical secret.

So after dramatically revealing to her audience that North Korea has a border with Russia — gasp — Maddow tonight went on an extended dot-connecting monologue where she darkly intimates that maybe somehow the real beneficiary of the Trump/Kim summit was… PUTIN. Beyond parody pic.twitter.com/a9bEwWn6l1

“It is a wicked cold, wicked isolated, grey little corner of the world,” Maddow explained to her surely stunned viewers, in a description which might come as a surprise to the people who spend their time in Russia’s Far East, where, despite popular Western belief, “wicked cold” is not the standard year-round weather setting.

In case it hadn’t sunk in, Maddow reiterated that both China and Russia “are literally neighbors” with North Korea. The report, heavy on innuendo, then continued for another 15 minutes, with the host ranting and raving about Trump’s legitimizing of North Korea by appearing to give the country “equal stature” with the United States.

READ MORE: Russia abhors the very idea of a nuclear war between its neighbor North Korea and the US – Putin

Maddow bemoaned Trump’s decision to halt joint military exercises with South Korea off the Korean peninsula, which she called “a pillar of US national security strategy”. Pyongyang, she said, gave up “nothing” in return for such a gift and the whole day was an “absolute jackpot” for North Korea.

An increasingly exasperated Maddow repeatedly asked her audience why the meeting had even happened at all, strongly implying at every step of the way that the entire thing had been coordinated by Russia. 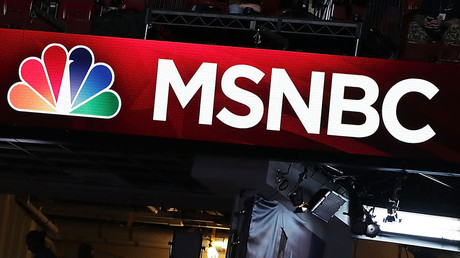 “Why did it happen? What was it for? No US president has ever agreed to meet with the North Korean dictator before — all US presidents have considered it to a certain degree. None of them have said yes. Why did this US president agree to this meeting?” she asked.

Finally, after 17 minutes of screeching and facial contortions, Maddow announced her theory —which could come as a shock to no one – that the real reason Trump took the meeting with Kim and agreed to halt military exercises with South Korea was obviously…Putin wanted him to.