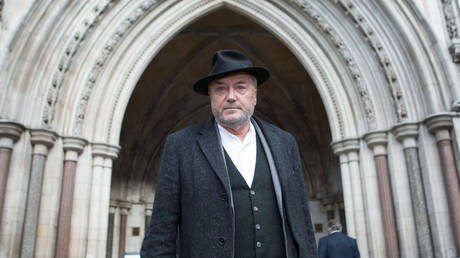 George Galloway says he has formally asked the Labour Party to let him rejoin after his “ridiculous expulsion” by Tony Blair over his opposition to the Gulf War.

The former Labour MP revealed his application in a nine-minute-long video commenting not only on his hopes for the future of the Labour Party, but criticising the party’s breakaway MPs, dubbing them the ‘Seven Dwarfs’.


Galloway made reference to other rebel Labour MPs who may join their colleagues in exiting the party as a “whole raft of rats who are about to jump ship in the hope it will sink that ship,” but that Labour will not only survive the departures but be “the more resplendent for being rid of them.”

Galloway, who was an MP for 30 years, also spoke of when the so-called ‘Gang of Four’ quit the party back in 1981. The key difference between then and now, according to Galloway, is that while the four who left almost 40 years ago had gravitas and political heft, the “same cannot be said of the seven dwarfs on parade this morning.”

Chris Leslie delivered an “honest statement” as a “supporter of the status quo” when the breakaway MP opined that Labour could not fulfil its election promises due to economic constraints, Galloway said, however:

Jeremy Corbyn’s program can only be afforded if there are radical changes in the British economy, if the rich pay more for living in Britain in the way that they have been dodging doing over many, many decades.

The plan can only work “if there is a redistribution of wealth and ownership of the British economy,” which is something Corbyn and Galloway think is justified. However, he said that Leslie and “people like him” do not want any fundamental change.

He dismissed accusations of anti-Semitism in Labour, Corbyn or those around him as a “lie,” adding that Corbyn has been fighting anti-Semitism and racism “all of their lives.” Further to that, Galloway said that all seven of the MPs who confirmed leaving Labour on Monday are associated with a group called ‘the Labour Friends of Israel’ and that their concern is not anti-Semitism, but anti-Israelism, and Corbyn’s recognition of injustices against the Palestinian people.

Touching on Brexit, Galloway accused the group of trying to “thwart” the referendum result and “spit in the face” of the millions who voted in their encouragement for another vote: “The worst possible thing for social peace in Britain would be a political elite of which they are perfect quintessential examples to stab the British people’s decision to leave the EU in the back.”


A vocal opponent of the Iraq war, the ex-MP was officially expelled from the Labour Party in 2003 for inciting British troops to disobey what he described as illegal orders, and for bringing the party into disrepute.

In his video statement on Monday, Galloway said that unlike those “who ditched the Labour Party today, I believe in Labour.” The people who kicked him out of the party almost killed Labour, he claimed, but “Jeremy Corbyn has brought it back to life.”