Tory MP Priti Patel held undisclosed meetings in Israel without telling the Foreign Office while accompanied by an influential pro-Israel Conservative lobbyist, it has been reported. She has been accused of breaking the ministerial code of conduct.

Patel, the international development secretary, met the leader of one of Israel’s main political parties and made visits to several organizations where official departmental business was discussed, according to the BBC. A source said at least one of the meetings was held at the suggestion of the Israeli ambassador to London.

British diplomats in Israel were not informed of Patel’s plans, despite ministers being obliged to tell the Foreign Office when they are conducting official business overseas. The meetings took place over two days in August while Patel was on holiday in Israel.

Foreign Secretary Boris Johnson has backed Patel on Twitter, however. He wrote: “Patel is a good friend & we work closely together for a GLOBAL BRITAIN. Quite right she meets with w/ people & organizations overseas.”

.@Patel4witham is a good friend & we work closely together for GLOBAL BRITAIN. Quite right that she meets w/ people & organisations overseas

No civil servants were present, but Patel was accompanied by Lord Polak, honorary president of the Conservative Friends of Israel (CFI), an influential lobbying organization that has access to wealthy party donors. Patel is a former vice chairperson of CFI. 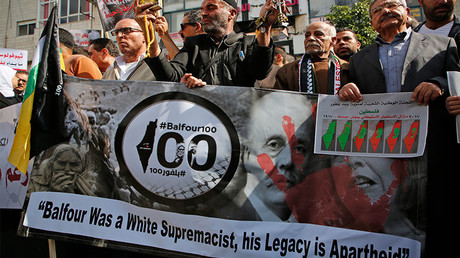 The MP met with Yair Lapid, the leader of Israel’s centrist Yesh Atid party and a former finance minister in PM Benjamin Netanyahu’s coalition government. Lapid tweeted a picture of the meeting, saying it was “great to meet Priti Patel,” whom he described as a “true friend of Israel.”

She also met with Beit Issie Shapiro (BIS), a leading Israeli disability charity and campaign group, where she reportedly discussed the possibility of her department forming a long-term partnership with the organization. Jean Judes, executive director of BIS, published a picture on Facebook of Patel visiting her organization.

“As the director of the DFID – UK Department for International Development, Ms Patel expressed interest in a long-term relationship with Beit Issie Shapiro, harnessing Israeli innovation to advance assistive technology for the benefit of people with disabilities in underdeveloped countries. We look forward to a strong, fruitful partnership with DFID to enhance the quality of life of people with disabilities worldwide,” Judes wrote.

Great to meet with Priti Patel, UK Secretary of State for International Development, today. A true friend of Israel. pic.twitter.com/8q9qSeX7YZ

Some ministers and MPs accused Patel of trying to win favor with wealthy pro-Israel Conservative donors who could fund a potential leadership campaign. Others accused her of conducting her own “freelance foreign policy” on Israel.

Ministers told the BBC there was a risk that Patel’s meetings could have broken the ministerial code of conduct which states that “ministers must ensure that no conflict arises, or could reasonably be perceived to arise, between their public duties and their private interests, financial or otherwise.”

One minister said: “This is outrageous. She is [a] cabinet minister. She just cannot do this. This is about donors and influence.” Another former minister said: “What does it say for the rest of the Middle East if a senior cabinet minister in charge of Britain’s huge aid budget disappears for 48 hours from a family holiday in Israel and is under the wing of a pro-Israeli lobbyist?”