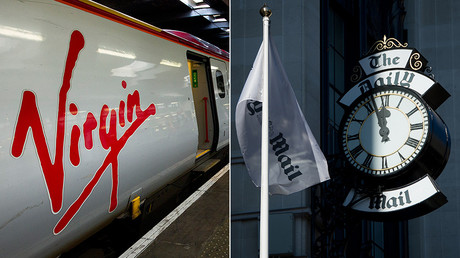 The issue of freedom of speech was at the centre of the debate, with Aaronovitch dubbing Virgin’s decision “an act of censorship” against the British paper, tweeting “On their own admission they are not selling something they sold before mainly because they don’t like what it says.”

No folks. Clever arguments and all but I’m afraid Virgin’s IS an act of censorship. On their own admission they are not selling something they sold before mainly because they don’t like what it says.

O’Brien challenged the writer, questioning whether Aaronovitch meant for companies to be “compelled to sell things they don’t want to.”

After being attacked, The Times columnist cited previous incidents of censorship, namely the initial banning of GBT publication ‘The Gay News’ by retailer WH Smith in the 80s.

In the 80s the WH Smith chain refused to stock Gay News on grounds of giving offence. Was that not censorship?

O’Brien also faced criticism when he asked his followers whether the Mail and then-owner Lord Rothermere “had continued their passionate support for Hitler” would there have been the same objection to “retailers refusing to sell it.” TV critic Kevin O’Sullivan took the bait, asking O’Brien: “Do you want freedom of speech or not? If you don’t, all aboard the Virgin Express!”

I’m torn but ‘bans’ & ‘censorship’ aren’t binary good/bad issues. If, for example, the Mail & its owner Lord Rothermere had continued their passionate support for Hitler after war had been declared then presumably there would be little objection to retailers refusing to sell it. pic.twitter.com/T0yP4ToLPj

I’d object, James. Censorship is never good. Do you want freedom of speech or not? If you don’t, all aboard the Virgin Express!

The issue of freedom of speech has long been a point of contention in the UK, where it is not enshrined – or at least paid lip-service – in the constitution, as it is in the US.

Virgin’s decision to stop carrying the Daily Mail was, according to a company memo, due to “considerable concern raised by colleagues about the Mail’s editorial position on issues such as immigration, LGBT rights, and unemployment.”

In response the paper accused the rail franchise “disgraceful,” a spokesperson saying that the rail service was “censoring the choice of newspapers it offers to passengers.”

Some Twitter users felt that the Mail and its supporters were missing the point.

LOL.
Loving the way thick rightwingers are in meltdown over Virgin Trains’ decision to stop buying the Daily Mail, then realise they can’t do anything about it because of their own policy of giving private rail firms a monopoly to do what they like.
😂