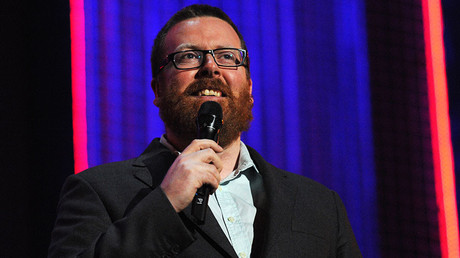 Controversial comedian Frankie Boyle has voiced his displeasure at the BBC allegedly editing out his monologue that included a claim that Israel is an ‘apartheid’ state on his ‘New World Order’ show. But should he be surprised?

He told his Twitter followers that the public service broadcaster had removed the section where he talked about “Israel being an Apartheid state. Edited out for reasons nobody has yet explained to me, despite assurances to the contrary.”

There were, of course, various jokes in this weeks’s New World Order monologue about the situation in Gaza, and about Israel being an Apartheid state. Edited out for reasons nobody has yet explained to me, despite assurances to the contrary.

Boyle was posting following a social media backlash against his segment on Labour Leader Jeremy Corbyn and the apparent ‘crisis’ of anti-Semitism in left wing politics. Boyle alongside fellow comedian David Baddiel focused on pillorying Corbyn for his perceived lack of action on anti-Semitism that they say has enveloped the Labour party.

In a week when Israel murdered more than 60 unarmed protesters, Frankie Boyle chose to focus on Labour’s anti-Semitism. I won’t make the comparison between criticising Israel and being labelled anti-Semitic because he just made it for me. #NewWorldOrder my arse

BBC paying guests to come on and attack Jeremy again. Frankie Boyle calls himself a socialist, but no socialist would attack a great man like Corbyn by using satire. Satire is for punching up, not down. #newworldorder

@Baddiel lied about Corbyn supporters. The 29% of Corbyn supporters believe Jews control the world quote is not only a lie, but it’s at the same level of lazy slack jawed humour which was mainstay of his laddish persona in the 90s. He’s grey and mature now

Boyle defended himself from his Twitter critics, citing his support of Palestinian causes, while disclosing that the BBC had cut out his monologue on the recent Gaza killings, which he said contained criticism of Israel’s actions.

Some may suggest that Boyle has been somewhat naive to believe that the BBC would air a segment outwardly criticising Israel. It’s is all the more bizarre considering he had been of the view that the BBC is ‘institutionally biased’ on the Israel-Palestine situation – a claim he made in an interview with RT’s Max Keiser in 2013.

He said: “If you look at certain things reported by the BBC, if you look at something like Israel/Palestine. You can see a great deal of what would seem to be institutional bias.”

It’s this historical evidence of Boyle’s cynicism towards the BBC’s perceived defensive agenda on Israel that has been lept on by his critics, such as Nazraeth-based journalist Jonathan Cook, who criticised Boyle. He has now been blocked by the comedian.

In an open letter to Frankie Boyle, Cook infers that the comedian’s evaluation of the BBC in the context of bias on Israel/Palestine is coming back to haunt him.

Cook tells Boyle: “When the BBC censors material critical of Israel, it does so because – as you, Frankie, have noted, it conflates that criticism with anti-Semitism, just as Israel hoped.”

My latest: Frankie Boyle went on a social media rampage at the weekend, blocking anyone – including me – who criticised his new TV show. Here’s my open letter to him explaining why that show betrayed the Palestinians of Gaza https://t.co/dLE1H7kD0i

Many social media users have been critical of Boyle’s apparent naivety, with some suggesting that if he had any integrity then he would quit the public service broadcaster, highlighting the many occasions he himself has been damning of the BBC.

The ‘alternative’ comedian has since responded to the alleged editing, in a Facebook post to emphasise his consistent demonstration of solidarity with Palestinians. “For what it’s worth, my views on Israel/ Palestine, which have never changed. I regularly do gigs for Palestinian causes; mostly I’ve organised them myself.”

He then seems to express disappointment at the personalized nature of the criticism being directed his way. He says: “The fact I’m now being photoshopped as Netenyahu [sic] because my monologue got cut is pretty depressing.”

Will this be the straw to break the camel’s back for Boyle and the BBC – or will the lure of a platform on prime time TV be too good to turn down?