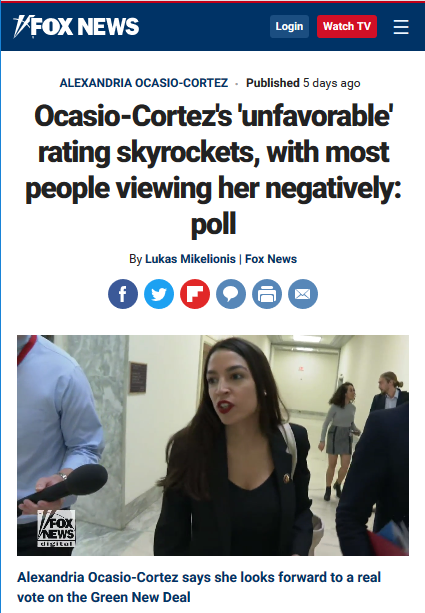 Over the weekend, Fox News published a story (3/17/19) on a recent Gallup poll that asked the public about their opinions on Democratic Rep. Alexandria Ocasio-Cortez. The headline claimed that her unfavorable rating had “skyrocketed”—rising 15 points since last September—and that “most people” now viewed her negatively.

In doing so, the network committed two notable journalistic sins—one of commission and one of omission. First, the headline itself was a sloppy falsehood, as the Gallup poll from February only found a plurality of the public (41 percent vs. 31 percent)—and not a majority, or “most people”—rating Ocasio-Cortez unfavorable rather than favorable.

But second—and more importantly—the story conveniently left out the key role that Fox News itself has played in damaging the public reputation of the congressmember, thanks to a relentless propaganda campaign over the past six months. It’s a chilling case study in the self-fulfilling nature of the right-wing messaging machine.

Ever since her shocking primary upset of Democratic Party fixture Rep. Joe Crowley last fall in New York’s 14th District, Ocasio-Cortez has drawn the white-hot spotlight of the press. Young, outspoken, and, at times, unfiltered or imprecise, the representative has quickly built a national presence after only a few months in office, thanks in part to her push for unapologetically big and uncompromisingly progressive platforms, like the Green New Deal and Medicare for All. In addition, she’s become a media phenomenon thanks to her massive social media following, which has in turn spawned numerous ham-handed attempts by conservatives to attack her online, which consistently backfire.

Conventional right-wing media outlets don’t bother with engaging her directly, however. As her profile has risen, so too have their concerted attempts to target her with unflattering, distorted coverage. And perhaps no place in the conservative media firmament is as obsessed with tracking Ocasio-Cortez as Fox News. Her name appears so frequently on the network, in fact, that she even has her own keyword tag to allow online readers to follow their coverage. 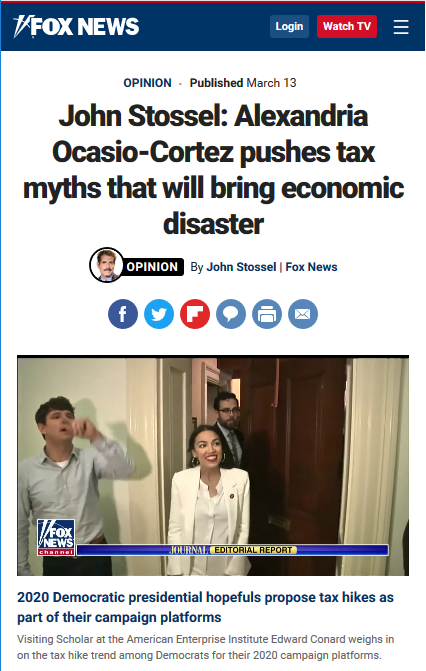 Fox News also has keyword tags for two other outspoken freshman female Democrats in Congress, Rep. Ilhan Omar and Rep. Rashida Tlaib—both of who are practicing Muslims and are also strongly in favor of policies like the Green New Deal. So it’s a not-so-subtle signal about Fox News’ institutional assessment of threats to conservatism that it gives the same organizational treatment to three young, newly elected women of color as it does for the Democratic speaker of the House, Nancy Pelosi, and the Democratic Senate minority leader, Chuck Schumer.

This kind of audience guide is admittedly necessary when your news organization is executing a non-stop propaganda campaign. In the 134 days since Election Day, Ocasio-Cortez’s name appeared in 1,173 separate stories on Fox News alone. Even if many of those stories referenced her only tangentially, that still adds up hundreds upon hundreds of stories or segments focused squarely on her. (This sensationalistic stalking has not gone unnoticed by Ocasio-Cortez, who jokingly calls the network “AOC TMZ”—”no offense to TMZ.”)

To be clear, bird-dogging a politician’s policies or rhetoric is fair game, if the motivation is to hold him or her accountable. But even a cursory perusal of Fox News’ output finds that an overwhelming majority are not good-faith efforts at accountability. Instead, they are intentionally framed to fearmonger or distort Ocasio-Cortez’s policies, if not heap contempt and insults on her personally. Since many Fox News viewers are already psychologically primed to disbelieve, if not outright disdain Democrats, the cumulative effect of a campaign of this magnitude is utterly predictable: Many Republicans who had never heard of Ocasio-Cortez before the midterm elections have now absorbed and accepted Fox News’ incessant denunciations of her.

To see a microcosm of how the right-wing messaging congealed around—and against—Ocasio-Cortez, consider Fox News primetime host Tucker Carlson’s own personal journey. Just days after the midterm election (11/14/18), he was on-air sheepishly admitting Ocasio-Cortez “has a very good point” in her criticism of the unfair aspects of the New York/Amazon deal.

Three months later, however, there was little interest in making common cause with her left-wing populism. Instead, Carlson (2/13/19) could be found mocking her as a “screechy moron” and a “theocrat,” while fueling conspiracy theories that she would use the Green New Deal to give “control of the entire US economy to the Democratic Party.” And this kind of vicious, unhinged coverage is the rule, not the exception. 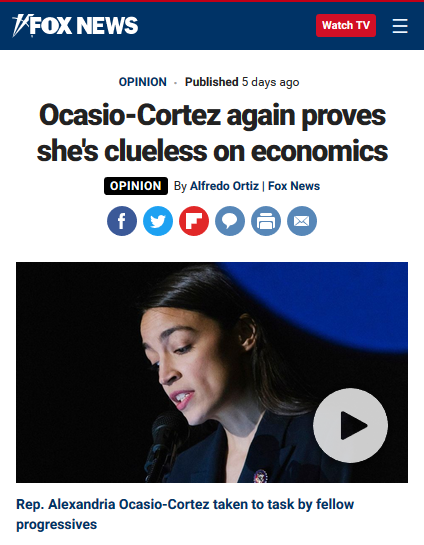 During just the past week, for example, Fox News has run more than three dozen separate stories or video segments focused on or referencing Ocasio-Cortez—an average of more than five a day. By comparison, the network had just 21 similar stories listed under its Nancy Pelosi tag during the same period. Below is just a sampling of the “straight news” coverage of Ocasio-Cortez on Fox News this week:

The opinion programming on Fox (and Fox Business News) during the past week is if anything even more relentless and less subtle:

Fox News is, of course, far from alone here. Ocasio-Cortez has now supplanted Nancy Pelosi as the go-to bogeyman and punching bag for the conservative press, no matter how absurd the depths they must sink to to make it so. (One standout example: a long, rambling March 2 New York Post hit piece that bashed Ocasio-Cortez for hypocrisy because she a) rides in cars and planes, and b) failed to compost a sweet potato peel and threw away two plastic garbage bags in an Instagram cooking video.) 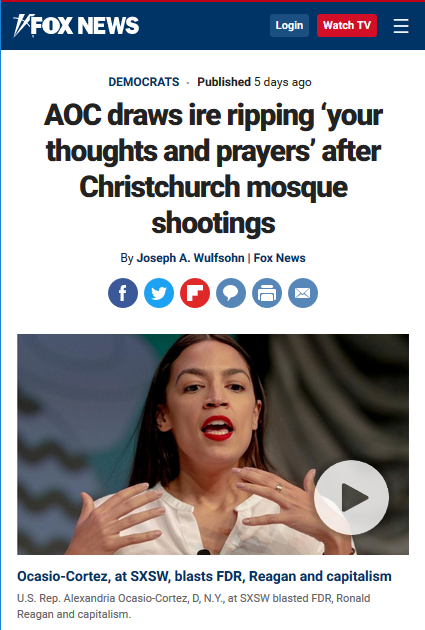 Fox News wasn’t alone in effectively erasing those who like Ocasio-Cortez. The CNN write-up (3/16/19)  of the Gallup poll used a clickbaity headline—“Alexandria Ocasio-Cortez Polls Like Donald Trump: Poorly”—that failed to acknowledge that members of Congress generally fare poorly in nationwide polling. Another pundit’s summation of the poll, which the congressmember herself called out on Twitter (and which has since been deleted), offered a telling bit of demographic gerrymandering around who counts as the default to the press: “AOC is underwater with every group except women, nonwhites and 18–34 year olds.” This works out to “everyone”—meaning white men 35 and older—being roughly one-fifth of the adult population.

And because Ocasio-Cortez’s net fav/unfav ratings fell slightly among independents and rose by a net 8 percentage points among Democrats, the Gallup poll’s result stands as a proxy for the effectiveness of right-wing partisan branding. Or, as the Gallup survey notes, “The fact that Republicans are more likely to have an opinion of her than Democrats helps explain her overall net-negative rating.”

That inconvenient truth, not surprisingly, never made it into this weekend’s Fox News write-up. But the urgency behind the network’s round-the-clock anti–Ocasio-Cortez campaign shows no sign of relenting. Perhaps most especially because of one of the few, not-so-negative headlines to pierce the veil of Fox News’ propaganda back in January. And it’s worth pointing out that this story’s headline about “most voters” actually got it right this time:

You can contact Fox News here (or on Twitter: @FoxNews). Please remember that respectful communication is the most effective.