Failure to pass a key Brexit vote in parliament this week could see Theresa May ousted from office, a former prime minister has said.

Speaking in an interview aired on the Andrew Marr Show on Sunday, Gordon Brown said that while an unfavorable vote for the government on key elements of the EU Withdrawal Bill could spell the end of May as prime minister, a Tory government could then limp on for its full five-year term. 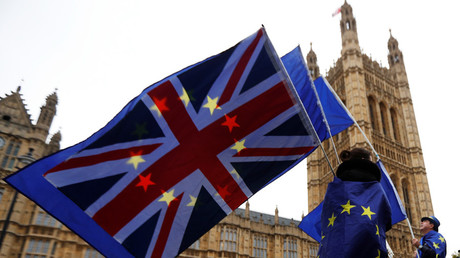 Parliament is due to return this week on Tuesday and Wednesday to debate and vote on key elements of the bill. These include a vote on the customs union and whether its transition deal will be extended from its original end in December 2020 to 2023.

Also to be debated is whether parliament will have a say in what happens if a Brexit deal is rejected.

May is expected to plead with Tory MPs today to cast infighting aside and back the government as it seeks to overturn a raft of amendments by the House of Lords, which are intended to keep Britain close to the EU after Brexit.

However, she faces a potential revolt by pro-EU members of her party, who are determined to retain as many of the proposed changes as possible in the legislation.

Brown, who served as prime minister between 2007 and 2010, made the comments when asked by Marr about what would happen to the government if it lost the vote on the customs union.

“I think what will happen if the government loses a vote is that there is potentially the chance of a change of prime minister, but I don’t think at that point they will want to give up as a government,” adding: “I think the five-year parliament makes it possible for them to survive.

“So, I think the issues come down to whether the meaningful vote after the customs union vote, the meaningful vote, means that parliament rejects or potentially could reject the whole settlement, and that’s the point of further crisis.”

The vote is likely to strain tensions within the Conservatives and the respective pro-EU and pro-Brexit wings of the party.

Describing the upcoming customs union vote as “difficult for the Brexiteers,” Brown said that May’s plans to extend Britain’s membership to 2023 would put Europe at the heart of the next general election.

“So, I think all these things are still in the air, but certainly there are two moments of decision in the next few months, one on the customs union and one on what’s called the meaningful vote, as to whether when you get the final terms of negotiation, MPs can actually both reject it and perhaps offer an alternative or even discuss another way of consulting the country.”