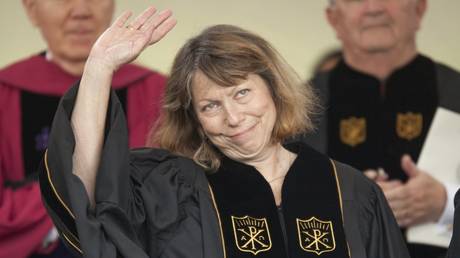 Former New York Times executive editor Jill Abramson has been relentlessly roasted by social media, after evidence emerged that she plagiarized material for her new book. Abramson says she will “review” the passages in question.

The author’s recently released literary offering, ‘Merchants of Truth,’ has been billed as “the definitive in-the-room account of the revolution that has swept the news industry.” But it appears that at least part of her “in-the-room account” was lifted from other sources without providing proper attribution.

After flipping through the new book, Vice News correspondent Michael Moynihan tweeted a now-viral thread, which compared excerpts from ‘Merchants of Truth’ with material from the New Yorker, the Columbia Journalism Review, Time Out magazine – and even a master’s thesis.

Moynihan said that he stumbled upon the allegedly plagiarized material while trying to verify claims that Abramson had made about Vice News in her book. Although he only focused on the chapters that dealt with the Brooklyn-based news outlet, the journalist concluded that Abramson’s book was “clotted with mistakes.”

The Vice correspondent wasn’t the only one to notice something fishy about Abramson’s authoritative prose: journalist Ian Frisch noted that the former New York Times bigwig had taken a few liberties with his own reporting.

Appearing on Wednesday night on Fox News, Abramson was asked if she had any comment on the plagiarism accusations.

“I really don’t,” she said. “All I can tell you is I certainly didn’t plagiarize in my book and there’s 70 pages of footnotes showing where I got the information.”

While it’s true that footnotes were provided for some of the offending passages, many have argued that such extensive borrowing – in some cases excerpts from other sources were retooled almost verbatim – would require Abramson to credit sources directly in her text.


Taking to Twitter on Wednesday evening, Abramson then fired off a series of poorly received tweets in her defense.

“The attacks on my book from some @vicenews reflect their unhappiness with what I consider a balanced portrayal,” she argued. Minutes later, she claimed that she “endeavored to accurately and properly give attribution to the hundreds of sources that were part of my research.”

Perhaps realizing that her deflections weren’t working, Abramson promised that she “takes seriously the issues raised and will review the passages in question.”

The damage had already been done, however, with blue-checkmarks and anonymous netizens alike lining up to pelt her with e-tomatoes.

“Maybe some of the incorrect facts and plagiarized passages in the book are really just metaphors for how legacy media operations were destined to fall and this whole thing is just @JillAbramson pulling a Banksy… that’s my preferred view anyway,” journalist Michael McCutcheon joked.

No, Jill. This wouldn’t fly with my 12th grade English teacher. You can’t just change a few words and add a word or two but leave 95% of someone else’s writing the same. You should feel ashamed. I was when I accidentally did it in high school because I didn’t know better. Giant F

The controversy could become a bit of a black eye for Abramson’s current employer, Harvard University, which hired the former Times editor to teach creative writing.