To hear the former CIA director turned NBC pundit John Brennan tell it, Donald Trump has destroyed the prestige of American presidency. Intent on playing his part in the #Resistance, Brennan glosses over some genuine horrors.

The career spy, who led the CIA during President Barack Obama’s second term (2013-2017) penned an angry op-ed in Thursday’s Washington Post, blasting President Trump’s character and temperament and lavishing praise on his predecessors.

Trump has diminished the “respect, awe and admiration” Brennan once held for the office of the presidency, the former top spy writes. With stars in his eyes, Brennan recalls meeting George H.W. Bush in 1990, and being charmed by the “curiosity, wisdom, affability and intense interest” of the Texan who led the CIA before becoming Ronald Reagan’s vice-president and a one-term chief executive.

By contrast, he writes, Trump is impulsive, dangerous, bent on self-aggrandizement and a routine liar to the American people. To those who follow Brennan’s twitter, the tirade is all too familiar.

Your kakistocracy is collapsing after its lamentable journey. As the greatest Nation history has known, we have the opportunity to emerge from this nightmare stronger & more committed to ensuring a better life for all Americans, including those you have so tragically deceived. https://t.co/eC6LATH2Gd

When the full extent of your venality, moral turpitude, and political corruption becomes known, you will take your rightful place as a disgraced demagogue in the dustbin of history. You may scapegoat Andy McCabe, but you will not destroy America…America will triumph over you. https://t.co/uKppoDbduj

While Brennan dumps on Trump in paragraph after paragraph of self-righteous fury, he talks of how the other presidents he worked for – Bill Clinton, Bush Sr. and Bush Jr, and Obama – led the country with “the seriousness, intellectual rigor and principles that it deserved.”

“The presidents I directly served were not perfect,” he writes, in a statement that perfectly captures his selective outrage. 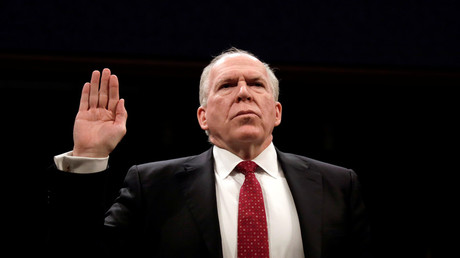 While Brennan bashes Trump for lying to the American people, he seems to forget that George W. Bush’s administration lied about the existence of Saddam Hussein’s weapons of mass destruction. That lie led to an illegal war in Iraq that cost over $1 trillion and whose fallout is still being felt in the region today. Not surprising, as doing so would implicate the CIA in doctoring intelligence to serve the White House’s agenda.

While Brennan bemoans Trump’s supposed assault on the free press, he skips right by Obama’s use of the Espionage Act to prosecute three times as many whistleblowers as all of the previous administrations combined.

“Obama has laid all the groundwork Trump needs for an unprecedented crackdown on the press,” Trevor Timm, executive director of the nonprofit Freedom of the Press Foundation, told the New York Times in 2016. So far, however, most of Trump’s ‘crackdown’ has consisted of calling people names on Twitter.

Likewise, Brennan rails against Trump’s alleged lack of ethics and decency while making no mention of multiple allegations against Bill Clinton of sexual misconduct during his time in the White House.

Brennan himself has held a long list of questionable positions. From expressly endorsing Bush’s torture programs and NSA eavesdropping, to lying about civilian casualties in Obama-era drone strikes and reorganizing the process through which strikes were authorized outside of war zones, Brennan has often played fast and loose with “the right thing to do.”

His foggy memory was noticed by commentators on Twitter, who were quick to point out his hypocrisy.

John Brennan is mainly upset about Trump because he’s diminished “respect, awe and admiration” for the presidency. Of course it doesn’t occur to Brennan that the presidency might not have deserved those things in the first place https://t.co/oDznesBfaMpic.twitter.com/KBk7t1K2kG

A scoop from John Brennan: during his years at CIA, he appears to have heard three separate Presidents say the exact same thing in the Oval Office: “I don’t care about my politics, it’s the right thing to do.” How lucky are we to have had such noble leaders over such a long time? pic.twitter.com/UtgLWcUjwW

In his Post op-ed, Brennan insists that he is not motivated by partisanship or personal grievance. Instead, he says, he believes that Trump is “failing to live up to the standards that we should all expect of a president.”

His concern for “integrity, decency, wisdom — and maybe even some humility” in the White House is touching. It’s also ironic, considering that Trump has accused Brennan of leading the effort to frame him for collusion with Russia during the 2016 presidential campaign, knowingly using a dossier of salacious and false allegations to jump-start an investigation that is still ongoing.

“This guy [Brennan] is the genesis of this whole Debacle. This was a Political hit job, this was not an Intelligence Investigation. Brennan has disgraced himself, he’s worried about staying out of Jail,” Trump quoted Dan Bongino.