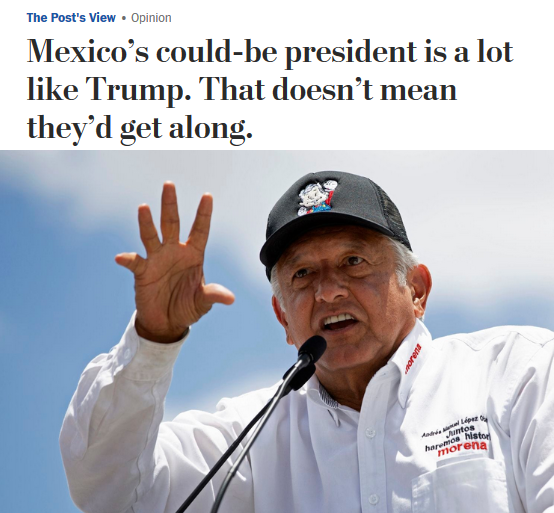 According to the Washington Post (6/17/18), Andrés Manuel López Obrador, the frontrunner in Mexico’s July 1 election, “bears more than a passing political resemblance” to US President Donald Trump.

Indeed, they are practically the same person: In the late 1970s, AMLO—as López Obrador is sometimes called—was “taking on Mexico’s state-run oil company, Pemex, setting up protest camps outside its offices to force it to pay compensation to indigenous communities and campesinos whose lands it had polluted.”

Around the same time, in 1975, Donald Trump was busy settling a lawsuit with the US Justice Department that accused the company he owned with his father of refusing to rent or negotiate rentals “because of race and color,” “requir[ing] different rental terms and conditions because of race” and “misrepresent[ing] to blacks that apartments were not available.”

AMLO says that, if elected, he will explore the possibility of granting amnesty to those involved in Mexico’s bloody drug war in order to bring peace to the country. Trump’s Attorney General Jeff Sessions directed federal prosecutors to

pursue the most severe penalties possible, including mandatory minimum sentences, in his first step toward a return to the war on drugs of the 1980s and 1990s that resulted in long sentences for many minority defendants and packed US prisons.

As mayor of Mexico City, López Obrador subsidized subway fares and gave stipends to senior citizens and single mothers. As president, Trump and his allies in Congress doled out “close to $5 trillion in tax cuts almost exclusively for the wealthy,” including a corporate tax cut of $1.5 trillion that CEOs say they will keep rather than invest or use to increase workers’ wages, while raising taxes on lower earners by $5.8 billion, taking such measures as eliminating tax deductions for interest on student loans, medical costs and teachers’ out-of-pocket expenses.

Thus, the editorial’s entirely apt and not-at-all hallucinatory title reads in part, “Mexico’s Could-Be President Is a Lot Like Trump.”

The Post’s López Obrador/Trump analogy is a particularly pernicious (and dumb) instance of what Tariq Ali calls “the extreme center,” a dynamic that reduces politics to “a contest to see who can best serve the needs of the market,” and one that has dominated the West since the collapse of the Eastern Bloc. The extreme center involves two political parties funded by the same sources carrying out very similar policies, including neoliberalism, austerity, mass surveillance and US-led wars. Centrists, extreme or otherwise, treat a departure from these practices as dangerous radicalism.

The one incredibly shallow sense in which Trump and López Obrador are comparable is that both have taken positions that fall out of the extreme centrist status quo. However, Trump challenges the center from the right and AMLO does so from the left. In conflating Trump and López Obrador, the Post emphasizes the sole superficial trait they share and skates over the manifold, substantive differences between the two. For example, the Post’s editorial concludes:

If Mexicans choose Mr. López Obrador, they will be, like the voters who backed Mr. Trump, blowing up the status quo without a reliable sense of what will replace it. The result is likely to be more trouble on both sides of the border.

It’s true that AMLO could mean “trouble,” but for a rather dissimilar constituency than Trump. López Obrador has vowed to reverse Mexican oil policies that led to a $15 billion energy trade deficit with the US in 2017, and is proposing “a sweeping reorientation of the nation’s energy policy with an emphasis on independence from the United States.” This “could slow oil production in Texas and impede deepwater drilling in the Gulf of Mexico by international oil giants like Exxon Mobil and Chevron,” while hampering natural gas sales to Mexico “that are an important source of revenue for American oil and pipeline companies.” Trump, by contrast, has been “trouble” for Yemeni civilians, Puerto Rican hurricane victims, and migrant children, toddlers and babies. 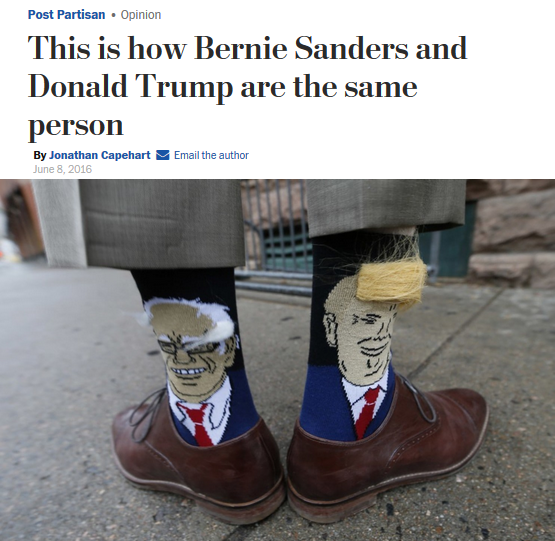 Trump and Sanders are both “outsider egos storming the political establishment,” wrote Washington Post editorial board member Jonathan Capeheart (6/8/16), and so Trump’s nomination victory “could spell doom for the GOP all over the ballot in November.”

Yet the extreme center refuses to acknowledge even the most elementary distinctions between those who depart from the reigning consensus. For all the Post’s criticism of Trump, the paper is fundamentally committing the same error that Trump did when he equated white supremacists with anti-racists in Charlottesville last August: Everyone angry about the state of the world is the same, however numerous and gargantuan the gaps in the political content of their grievances, or of the social changes they endorse.

Nor is it the first time the paper has trafficked in these false equivalencies, having run a piece called “This Is How Bernie Sanders and Donald Trump Are the Same Person” (6/8/16), as well as articles (1/27/17, 12/26/17) drawing bogus parallels between Trump and Venezuela’s Hugo Chávez.

Such comparisons function to malign those who advocate reforms to improve the lives of the poor and working class, equating them with a racist warmonger who enriches the extremely wealthy and has bragged about sexually assaulting women. That is almost certainly the point of this bizarre insistence that thesis and antithesis are equivalent.