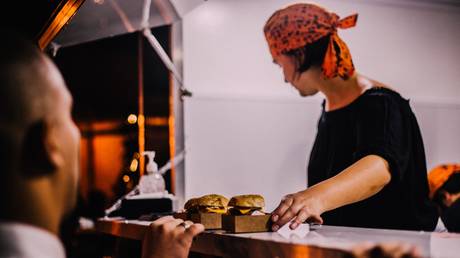 Local fast food enthusiasts in Eugene, Oregon were shocked to find their favorite food cart had been blown to smithereens early Sunday morning.

Buck Buck Food Cart, which serves “fried chicken and Northwest Ingredients,” spontaneously combusted on February 24. The moment the cart was obliterated was caught on a neighboring building’s CCTV camera.

Thankfully, there were no injuries, but some minor damage to buildings in the vicinity, including opening up the tap lines and rupturing several kegs at the local Oakshire Brewing facility, flooding it with beer before staff could get the situation under control.

“Thank you so much for all the love and support we’ve received already. We’re waiting for the word from the Fire Marshall before we can start the clean up process,” the owners wrote on Facebook.

“I said, ‘Holy moly.’ Well, it wasn’t as nice as ‘Holy moly,’ but it was quite a shock,” Buck Buck owner Mikey Lawrence told the Eugene Register-Guard.

The local fire department suspects the blast was caused by a faulty gas line from a propane tank, though an investigation into the explosion is still underway.