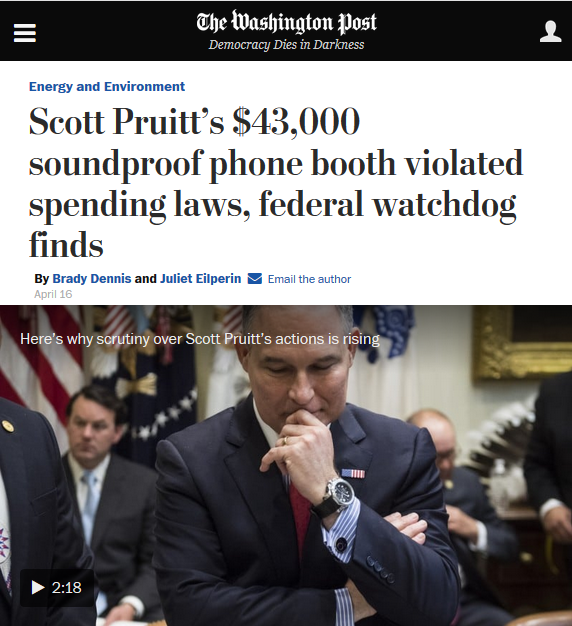 Scott Pruitt sure is busy these days. The climate change-denying head of the Environmental Protection Agency has been renting out a DC condo on the cheap from an energy lobbyist; installing a $43,000 soundproof booth for his telephone calls; passing out improper pay raises to aides; jet-setting around the world on first-class flights; hitting up Disneyland and the Rose Bowl with his oversized $3 million, 20-person security detail; receiving police escorts to trendy DC restaurant Le Diplomate; and even having a fancy dinner in Rome with Vatican treasurer, climate denier and recently charged child sexual abuser George Pell.

What’s more, Pruitt’s staffers at the EPA have continued to cover up for their boss: Pruitt’s lavish travel schedule is only released after the fact, and he holds few press conferences compared to his predecessors. All told, he is under 12 different federal investigations, and has been grilled by members of both Senate and House committees. In Pruitt’s Senate hearing, New Mexico Sen. Tom Udall remarked that “your scandals are a mere sideshow distracting us from the long-lasting devastating your leadership is making on human health and the environment.”

Indeed, while Pruitt seems to have adjusted well to the culture of gratuitous and unprecedented graft and corruption inside the Trump cabinet, the media’s focus on Pruitt’s dizzying array of personal scandals obscures his absolute contempt for his agency’s stated mission: environmental protection. Pruitt, along with President Trump, Interior Secretary Ryan Zinke and Energy Secretary Rick Perry, has quietly been dismantling a multitude of environmental regulations while pushing a number of fossil fuel-friendly policies that will certainly have disastrous long-term effects on the environment and public health.

Just to name a few so far:

This is only a tiny slice of what the Trump administration has been able to do so far, and most of the administration’s actions no doubt come as a result of the cozy relationship between the fossil fuel industry and the Trump cabinet. 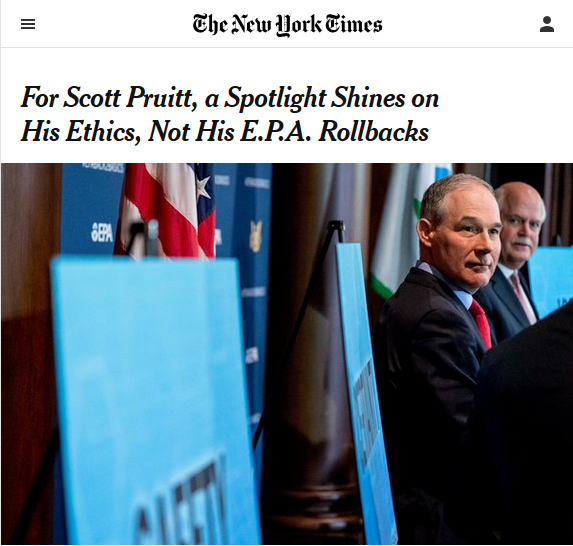 The New York Times (4/3/18) argues the downplaying of Scott Pruitt’s fight against environmental regulation is a bad thing—for Pruitt.

Even when corporate media have stepped back and questioned the emphasis on Pruitt’s individual misbehavior, the analysis still manages to focus on what this means for Pruitt personally, rather than for human health and ecological well-being.  The New York Times’ Coral Davenport (New York Times, 4/3/18) wrote that Pruitt’s ethical transgressions obscured his environmental policy agenda—but framed this as a personal and political misfortune for Pruitt, not a threat to the environment. “A plan to weaken President Barack Obama’s stringent rules on planet-warming tailpipe emissions,” she reported, “should have been Scott Pruitt’s finest moment,” leaving him “basking in glory”—almost as if we should be rooting for Pruitt to successfully increase global temperatures.

Stuart Shapiro in USA Today (4/28/18) took a contrary line, complaining that “EPA Scandals Overshadow Scott Pruitt Failure to Undo Obama Environmental Regulations.” Shapiro, a professor of public policy at Rutgers, argued that Pruitt’s “deregulatory efforts to date have failed, and his plans for future repeals of regulations are likely to meet the same fate.” His point that  “repealing a regulation is hard” is worth bearing in mind, but the focus is on whether Pruitt’s “accomplishments” are genuine and whether he deserves the “praise” he has gotten from Trump—not on how the success or failure of Pruitt’s efforts will impact the environment.

Major news outlets need to pay attention to political scandals, whether Pruitt’s blatant corruption or Trump’s wild outburst of the day, but their singular focus on such stories obscures the devastation that environmental degradation will impose in the coming years, and the need for climate action as early as yesterday. It is no exaggeration to say that climate change could be the most challenging crisis in the history of humanity. Viewers and readers need to be inundated with information on how the Trump administration is setting climate action back, and the current and future negative effects of climate change, including sea level rise, temperature rise, destruction of plant and animal life, public health concerns like famines and diseases, increased instances of drought, wildfire, storms and flooding and effects on war, migration and refugee crises, among many, many others.

While many of the varied scandals plaguing poor Scott Pruitt are intertwined with his comfy relationship with fossil fuel special interests, that should only make it easier for media outlets to connect the profit-seeking motives of extractive industries with the complicity of the federal government in willful ignorance on climate change.

Yet it might be near the end of the line for Pruitt; White House aides have decried his scandals as embarrassing and called for his firing. Pruitt’s successor will no doubt likewise be an ally of the fossil fuel industry, and might not be as nakedly corrupt. Bringing more sunlight onto climate issues now is necessary for setting a precedent for environmentally focused coverage in the future.