A remaining piece of London’s fatberg – a blob of congealed fat, oil and wet wipes – has drawn huge crowds at the Museum of London, where it has been “sweating” and changing color since being put on display.

The piece of waste – extracted from the so-called “monster fatberg” that weighed 130 tons and was found in a Victorian-era London sewer – has caused a “marked increase” in the number of visitors at the museum, its curator Vikki Sparkes has said.

Its popularity has been such that the museum is now considering preserving the piece as an artwork. “We’ve never worked on anything like it,” she said, the BBC reports. 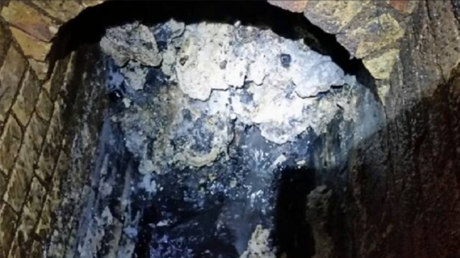 “There is an element of mystery about it,” Sparkes noted, before adding: “It’s under our feet, it grows. We’re all responsible for creating it.”

Since the exhibition opened, flies have hatched into the piece of fatberg. Despite its deterioration, the slice of waste is thought to be among the most popular artworks at the museum, which documents the history of the English capital from prehistoric to contemporary times.

The museum’s collection committee will next month decide whether to keep the segment of waste as an artefact rather than disposing of it. The rest of the 250m fatberg, which was discovered in September, has already been chopped up and transformed into bio-diesel.

Sparkes said that, although some people finding the piece revolting, it has still spurred them to engage in ideas about our consumerist society. She said she now has a “big soft spot” for the fatberg remnant.