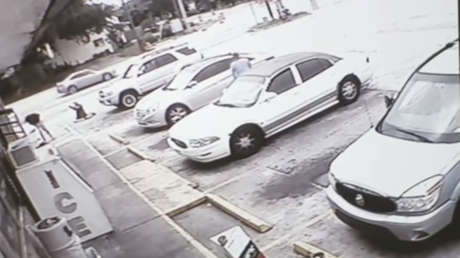 A Florida man who shot and killed another man in front of his children during an argument over a handicapped parking space will not face charges after the sheriff said the incident falls under the state’s “stand your ground” law.

Michael Drejka, 47, escaped a murder charge after shooting father-of-three Markeis McGlockton, 28, in the chest following a row outside a convenience store in Pinellas County near Tampa on Thursday afternoon.

CCTV footage of the incident shows Drejka confronting the victim’s girlfriend about their car being parked in a handicapped parking spot without a permit. Witnessing the argument, McGlockton rushed to the scene and pushed Drejka to the ground. Drejka then pulled out his handgun and shot his assailant, who then wheeled away, clutching his chest.

Two of McGlockton’s children, a four-month-old and a three-year-old, were in the car at the time of the shooting. His five-year-old was in the store, according to the Tampa Bay Times.

Drejka, who reportedly owns the gun legally and had a concealed carry permit, told deputies who interviewed him that he was afraid of being attacked. Pinellas County Sheriff Bob Gualtieri said the state would not bring charges against Drejka, as the shooting “is within the bookends of ‘stand your ground’ and within the bookends of force being justified.”

Florida’s “stand your ground” law was enacted in 2005 and allows residents of the state to use deadly force if they “reasonably believe” they are at risk of death or great bodily harm. The law states that people have “no duty to retreat” from their homes or vehicles if they feel threatened.

The law was most controversially cited in the case of George Zimmerman, a neighborhood watch volunteer who shot dead 17-year-old African American boy Trayvon Martin in Sanford, Florida, in 2012. Zimmerman claimed he shot the boy in self-defence following an altercation between the pair. He was not charged at the time, but national media attention meant that he was eventually charged and tried in Martin’s death. He was acquitted of second-degree murder and manslaughter in July 2013.