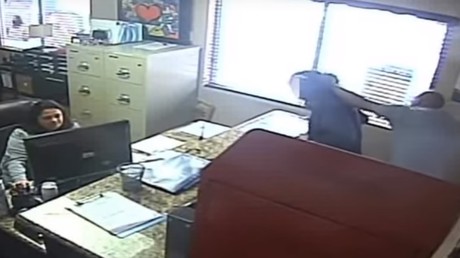 A Miami-Dade police officer was caught on CCTV hitting his 14-year-old daughter with a belt and dragging her by the hair at her school while administrators looked on without intervening.

Officer Raymond Rosario, 44, was called to Pinecrest Cove Academy in Miami by the school on March 19 after the teenager was reportedly disrespectful to her teacher, according to a report on his arrest. After he arrived, his daughter was called to the school’s main office, where Rosario was filmed grabbing the girl by her hair, punching her in the face, and hitting her with a belt.

The surveillance footage also shows at least two workers in the office looking on at the outburst without intervening.

On Friday, the school released a statement through Academica, the charter school’s management company, that only referred to one witness, saying she was pregnant and was hesitant to get involved in case the parent, known to school staff as a police officer, was armed.

The statement added that this witness reported the incident to school officials as soon as the parent left the site, and the school notified the Department of Children and Families, who in turn called the police.

“The school is continuing to investigate the incident and protocol,” it added.

Rosario, who has been suspended with pay, turned himself in to police on April 2 and has been charged with one count of felony child abuse. Court records reportedly show he pleaded not guilty to the charge, and his plea hearing is set for May 15. If the plea agreement avoids a criminal conviction on his record, he could possibly return to work.

Rosario’s daughter, who is no longer a student at the school, told police that she did not sustain any visible injuries from the assault.

RT.com has reached out to Miami-Dade Police Department and Academica for comment.