A group of “idiotic” youths have been slammed by Transport for London (TfL) after they fired a lit firework into a double-decker bus in northwest London. Footage captured on a passenger’s smartphone shows terrified commuters diving for cover.

The video, taken by a passenger sitting towards the back of the bus, shows people screaming and ducking for cover as the firework bounces off the walls and ceiling, sending sparks flying.

Steve Burton, TfL director of enforcement, said: “This idiotic behavior is extremely dangerous and will not be tolerated.

“We are working with Metropolitan Police to ensure appropriate action is taken.”

No one was injured in the incident, which happened on York Way in King’s Cross last Saturday evening, according to the London Ambulance Service. 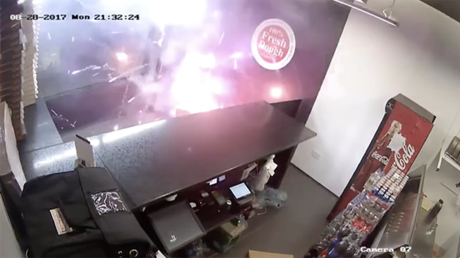 Once the firework had fizzled out, the video shows two young men jumping off the bus to chase down the perpetrators.

Passenger Apostolos Filis told ITV News: “It was really sudden. No one was expecting the attack. They started attacking cars and bikes but then went on attacking the bus.”

The Met police said the “anti-social behavior” is being investigated by officers from Islington policing patrols.

It comes after terrifying footage emerged of a similar event in August which saw a hooded man setting off a box of 70 fireworks at the Hello Pizza takeaway in Kirkdale, Liverpool.

The workers were forced to throw themselves over the counter and take cover at the back of the shop.

The fireworks then engulfed the takeaway shop with smoke, at one point obscuring the view of the CCTV camera.

The incident caused damage to the shop but none of the employees were injured.