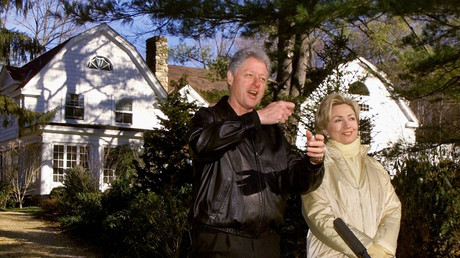 Firefighters were called to a property owned by Bill and Hillary Clinton Wednesday afternoon after a blaze broke out in one of the bedrooms.

The fire reportedly started at the couple’s Chappaqua residence sometime before 3pm local time. It was said to have been extinguished quickly. There was no indication as to what may have caused the fire or whether either of the Clintons were home at the time.

An ambulance was called to the scene but reportedly left without anyone inside. The house, which the couple purchased in 1999 when Bill Clinton was still US president, boasts five bedrooms and a pool on its 1.1-acre plot. In 2016, Hillary Clinton bought the property next door for a reported $1.16 million. Chappaqua is in Westchester County in upstate New York, around 40 miles from Manhattan.

Naturally netizens had a field day with the news, with many suggesting the house fire was a cunning ruse designed to dispose of evidence related to the former US Secretary of State’s perceived misdeeds.

AKA destroying evidence and obstruction of justice.