An incident at an air base in Northern California is reportedly being treated as a terrorist attack by US authorities, including the FBI and Air Force. A vehicle caught fire after breaching the main gate of Travis Air Base. 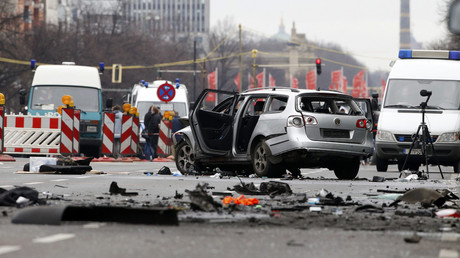 The car was full of propane tanks, according to local media. The vehicle erupted in flames shortly after crashing through the main gate of the base on Wednesday night, leaving the driver dead.

At present the incident is being treated as “an act of terrorism,” according to a report by Fox News. In a separate release, the US Air Force (USAF) said the FBI are helping the military to investigate the matter, but added that “no additional information is available at this time.”

The Air Force Times reported on Thursday that explosive ordnance disposal units and the Office of Special Investigations were among the first to respond to the incident.

Eyewitnesses said the crash was of an “explosive” nature. “The car basically blew up,” witness Kamren Hernandez told ABC 7 News. “It was nothing anymore.” Hernandez’ father Lamar said the car, thought to be a black SUV, “had something in there explosive.” He added: “It sounded like the 4th of July. I’ve never heard anything like that – really loud.”

Travis Air Base, home to approximately 7,000 troops and 3,700 civilians, is operating as normal. “The safety and welfare of our airmen, their families and our local community is our top priority,” Colonel John Klein, commander of the 60th Air Mobility Wing, said in the statement.

The compound hosts a sizeable fleet of the USAF’s cargo aircraft, including 26 C-5 Galaxies, 27 KC-10 Extenders, and 13 C-17 Globemaster-IIIs. It also accommodates the David Grant Medical Center, a 265-bed Air Force hospital which provides medical treatment to both active and retired military personnel.