Federal agents have arrested two police lieutenants and one officer accused of repeatedly sexually assaulting nine female inmates at a federal detention center in New York over a period of three years.

“By using their authority and power to prey upon and abuse female inmates in their care, these defendants violated their oaths of public service as well as numerous criminal laws,” Rohde said.

Lieutenant Carlos Martinez is accused of repeatedly raping an inmate at the MDC every weekend for months, often multiple times per weekend. Rohde wrote that he was “exploiting her fear of being sent to the Special Housing Unit and facing additional jail time to ensure her silence.” While Martinez was an active-duty lieutenant at the MDC, he had supervisory and disciplinary authority over inmates.

Martinez allegedly stopped the assault for a period of time while being investigated but raped the detainee one last time before she was transferred to immigration custody. Prosecutors accuse Martinez of abusing her because there was a high chance she would be deported at the end of her sentence.

“The defendant chose as his victim a sentenced prisoner who spoke minimal English, who he knew had virtually no visitors, and would be sent to ICE custody following her release from BOP custody,” prosecutors wrote, according to court filings obtained by the New York Times.

Lieutenant Eugenio Perez is accused of engaging in sexual contact with five different inmates over the course of three years. Rohde wrote that Perez used “force, intimidation and fear of adverse consequences to ensure the victims’ compliance.” He allegedly arranged for inmates to clean his office late at night, then forced them to perform oral sex on him.

In the court filings, federal prosecutors said that Martinez and Perez, who were responsible for training their subordinates about the Prison Rape Elimination Act (PREA), joked about the law on Facebook.

In a post with a photograph showing the two men hugging at a bar with a caption that read “It’s only P.R.E.A. when you don’t like it.” 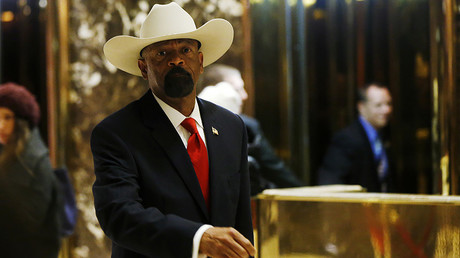 In 2014, the MDC’s PREA audit found that the jail met or exceeded all standards for rape prevention.

Officer Armando Moronta is accused of engaging in sexual acts with three inmates between May and June 2016, including oral sex while he was assigned to guard duty.

“Rape, sexual assault, and threats of retaliation must be aggressively investigated and prosecuted, and Justice Department employees who engage in such conduct should know that the OIG will pursue them and bring them to justice,” Gardella added.

All three men were arraigned in court and pleaded not guilty, according to the New York Times. Martinez and Moronta were held without bail while Perez is awaiting a bail hearing.

“As alleged, those charged today trapped their victims in a cycle of fear and intimidation while carrying out various acts of sexual abuse,” said FBI Assistant Director-in-Charge William Sweeney. “This type of conduct is never acceptable, especially at the hands of those who misuse the power afforded them as public servants.”