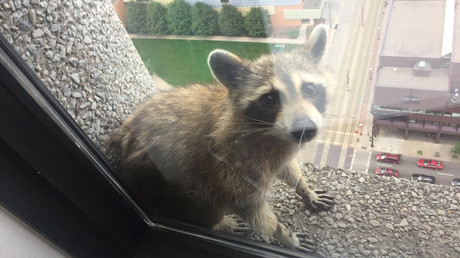 While people all over the world were watching history unfold at the US-North Korea summit in Singapore this week, Minnesotans were glued to an entirely different kind of summit drama.

An adventurous female raccoon was making a name for herself as she scaled the 25-storey UBS Building in St. Paul, earning herself social media fame in the process. The raccoon, who was first noticed by Minnesota Public Radio (MPR) journalist Tim Nelson (and was subsequently dubbed #MPRRaccoon), is believed to have found herself stuck on the ledge of a building in the city during a failed attempt to raid some pigeon nests.

The raccoon’s plight captivated and captured the hearts of Minnesotans and fans everywhere, who tuned into Twitter, anxiously awaiting news of her fate as she began to scale the concrete building. One Minnesotan told the NBC affiliate KARE11 that the raccoon was “unifying” the whole state. “How can you root against a small, furry creature?” he said.

There’s something tragic and inspiring about a poor, starved, and dehydrated raccoon refusing to give up and scaling a high rise building just to survive. Life is precious and worth fighting for. #mprraccoonpic.twitter.com/pEeDnKsaSg

Observers invested in the raccoon’s fate were told that no rescue could be attempted because the furry creature was too high up and could not be let inside because the building’s windows do not open. Traps were filled with food and placed on the roof instead; and there was nothing left to do but hope.

But the exhausted raccoon – which, experts believe, had not had food or water for two days – began to defy the odds, climbing the first twenty storeys of the building with relative ease before stopping to spend the hot afternoon asleep on a ledge on the 20th floor.

At this point, people had become so captivated by the raccoon’s perilous journey that, when the Fox 9 channel ended its live stream before the animal’s perilous climb came to its conclusion, viewers took to Twitter to express their outrage.

The world was watching, and you ended the live stream????? #mprraccoon Not cool, we need to see what happens.

At the same time, workers in the building were documenting the raccoon’s journey as she climbed past their office windows.

The daredevil raccoon became so popular that several Twitter accounts sprang up in her name, tweeting out status reports as events unfolded.

Anyone notice that all the EXTREME PRO TRUMP and EXTREME ANTI TRUMP people are really upset that a tenacious little raccoon has taken their platform of negativity away for just one night and replaced it with some positivity?#mprraccoonpic.twitter.com/FU3hwTD4m0

When she reached the 23rd floor, the raccoon had second thoughts and made a brief attempt to climb back down, before turning around and heading up again. Finally, at 2:30am on Wednesday, the hero raccoon reached the summit of the building and scampered off happily to find a waiting meal.

Much to the relief of the creature’s legion of fans, she was later rescued by Wildlife Management.