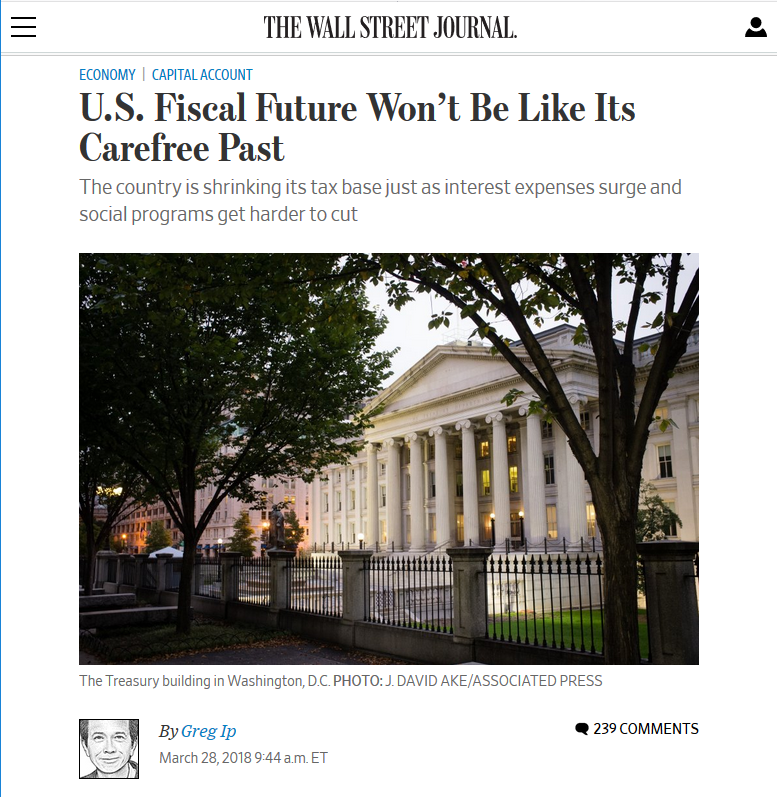 Wall Street Journal (3/28/18) advises you to say goodbye to your carefree fiscal ways.

Greg Ip gave us another rendition of this old scare story in a Wall Street Journal column (3/28/18). The argument is that the interest paid on US government debt will soon impose an enormous burden on the federal government, choking off spending on important government programs.

The key part of this story is that interest rates will jump at some point in the not-too-distant future. While this is in fact what the Congressional Budget Office predicts, it is also what it has been predicting ever since the Great Recession, and has consistently been shown wrong.

The key question is, why would interest rates rise? There are two stories where we see this happening. One is that we start to see an uptick in the inflation rate. In that case, long-term rates would almost certainly rise, since investors would have the option of getting a better return just by holding physical commodities. Of course, the Fed would almost certainly raise interest rates in response to higher inflation, which would more directly cause interest rates to rise. One point about higher inflation that is worth noting, though, is that it reduces the real value of the debt. 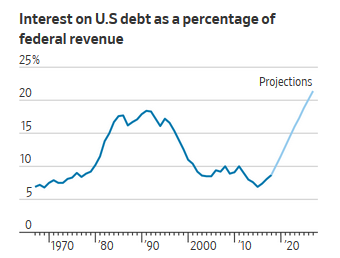 The Wall Street Journal‘s prediction (3/28/18) of a rapid rise in debt payments….

The other reason interest rates could rise is that the Fed raises rates even in the absence of higher inflation. In that case, the Fed as a matter of policy would be  increasing our interest burden. (Selling off its assets also has the same effect, since the interest on the assets held by the Fed are refunded to the Treasury.)

The deficit hawks have also never raised any concerns about the burdens created by government-granted patent and copyright monopolies. This is bizarre, since these monopolies are an alternative mechanism to direct funding. The government could directly pay for research on drugs, software and other items, paying for it through taxing or borrowing, or it can tell private companies to do the research, and then give them monopolies to allow them to recover their costs. 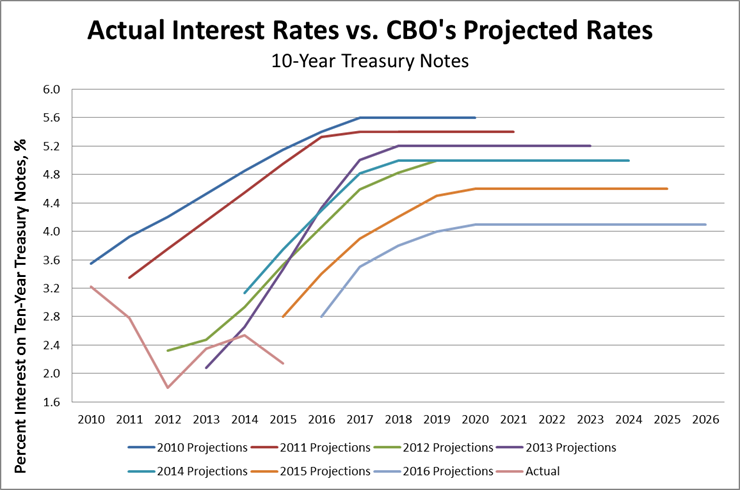 …is based on a spike in interest rates that has long been predicted and is yet to materialize (CEPR, 2/9/16).

Anyone who is seriously concerned about the burden of government debt on future generations must also be concerned about the burden posed by patent and copyright monopolies, if they are consistent. Of course, if their goal is simply to cut Social Security, Medicare and other social programs, then it is understandable they would not want to discuss patent and copyright monopolies.

You can send letters to the editor of the Wall Street Journal at wsj.ltrs@wsj.com. Please remember that respectful communication is the most effective.