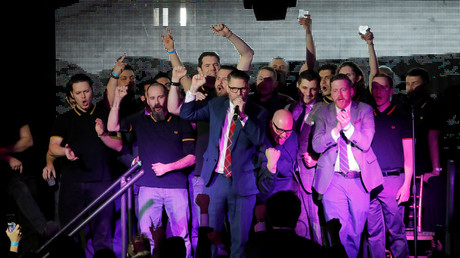 Weeks after reports of right-wing group Proud Boys being slapped with the ‘extremist’ label hit the headlines, an FBI chief in Oregon says there’s been a misunderstanding.

In a wide-ranging interview with local media, Special Agent Renn Cannon has revealed that, contrary to multiple reports, the FBI did not place the ‘extremist’ tag on the self-described ‘Western chauvinist’ group. He explained that there had been an apparent misunderstanding between Clark County police and the FBI, which “do not intend and did not intend” to brand Proud Boys like that.

FBI Special Agent in Charge Renn Cannon says FBI did not intend to designate Proud Boys as an extremist group during a recent briefing of Clark County law enforcement – but tried to characterize the potential for violence from individuals within that group. pic.twitter.com/7twWbFQnSz

Cannon said that the FBI indeed briefed local police on the threat from white supremacists, Proud Boys, anarchists and militia groups. Speaking of Proud Boys in particular, Cannon said the agents “characterize the potential threat from individuals within that group,” rather than assess it as a whole.

The Clark County officials might have gotten the wrong impression since the FBI agents made a reference to the Southern Poverty Law Center website, which describes the Proud Boys as an “extremist” and “hate” group known for “anti-Muslim and misogynistic rhetoric.”

“We do not intend and did not intend to designate the group as extremist,’’ Cannon stressed, adding that he “can see were Clark County representatives came to that conclusion.”

The confusion stemmed from an internal memo from the Clark County Sheriff’s Office dated August 10 on an investigation into the former Clark County female deputy who was found in violation of the sheriff office’s policy after her links to Proud Boys’ women’s wing, Proud Boys’ Girls, were exposed.

The memo cites the FBI as categorizing the group “an extremist group with ties to white nationalism.”


Although the memo was compiled in summer it was not until mid-November when the news of the FBI’s designating the group “extremist” hit the media headlines. The document was released by transparency group Property of The People on November 19 and soon grabbed national attention.

While the FBI took weeks to disavow the supposed designation, the founder and de-facto leader of the Proud Boys, Gavin McInnes, quit the group just days after the report.

McInnes did mention the group’s labelling by the FBI in his farewell video, but said that his motivation in dissociating himself from the group was primarily to help members on trial for allegedly beating up Antifa activists outside NYC Republican headquarters in October so they can receive lighter sentences.

Since Cannon’s admission, the Proud Boys issued a statement, calling on supporters to spread the news that otherwise risk to be underreported by mainstream media.

“I wonder if the media is going to cover this development as much as the original claim? Answer: They aren’t. So please share this far and wide.”