Two former FBI officials who worked on the Russia probe may be getting “cold feet” ahead of planned appearances on Capitol Hill this week, US President Donald Trump claimed in a tweet on Tuesday.

Peter Strzok and Lisa Page are due to appear before the House Judiciary Committee and House Oversight Committee, to answer questions about anti-Trump text messages they’d exchanged, which led to them being taken off the investigating team — but there have been conflicting reports about whether the pair will show up for the hearings.

I am on Air Force One flying to NATO and hear reports that the FBI lovers, Peter Strzok and Lisa Page are getting cold feet on testifying about the Rigged Witch Hunt headed by 13 Angry Democrats and people that worked for Obama for 8 years. Total disgrace!

In his tweet, Trump called Strzok and Page the “FBI lovers” in a reference to the fact that the pair were in a romantic relationship. He said they were getting “cold feet” about testifying about what he called the “Rigged Witch Hunt” against him.

The two officials had frequently exchanged anti-Trump text messages, including one vowing to “stop” Trump from becoming president. In June, Justice Department Inspector General Michael E. Horowitz, who conducted a review into the FBI’s handling of the Hillary Clinton email investigation, said that the text between Page and Strzok “potentially indicated or created the appearance that investigative decisions were impacted by bias or improper considerations” but concluded any anti-Trump bias had no significant impact on decisions in the Clinton email investigation. 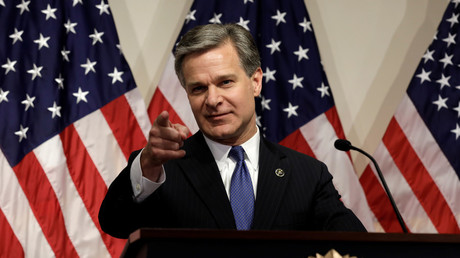 Strzok is expected to testify at a two public House hearings on Thursday, but some reports suggest that Page could be a no-show at her planned closed-door deposition on Wednesday. If both show up as planned, they are expected to face questions about their involvement in the FBI’s Russia investigation. Page resigned from the FBI in May but Strzok remains working for the bureau in a new capacity.

In an interview with the Wall Street Journal earlier this year, Trump said the text between Strzok and Page amounted to “treason” and had exposed an FBI plot against him.