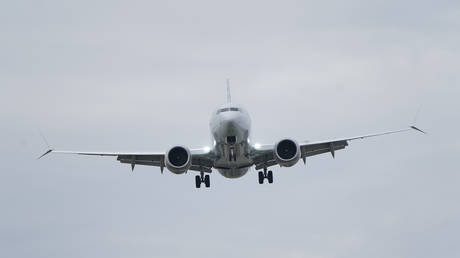 The Federal Bureau of Investigation has joined a multi-agency criminal probe into the certification of the Boeing 737 Max 8, following reports that regulators had delegated much of the troubled plane’s testing to Boeing itself.

The FBI will assist in the inquiry launched by the Department of Transportation’s Inspector General in conjunction with the Justice Department, an investigation that reportedly began before Ethiopian Airlines Flight 302 crashed last week, killing all 157 people on board – the second of the hot-selling Boeing passenger jet to crash in under six months. The scope of the investigation has since widened, with at least one subpoena issued to someone involved in the plane’s development. The FBI would not confirm or deny their involvement in the probe.


A Senate Commerce subcommittee on aviation and space has called a hearing on federal oversight of commercial aviation for March 27 and plans to question acting FAA head Dan Elwell, National Transportation Safety Board chair Robert Sumwalt, and Transportation Department Inspector General Calvin Scovel. The committee, chaired by Sen. Ted Cruz (R-Texas), plans to summon industry stakeholders to a second hearing on aviation safety “in the near future.”

Most of the 737 Max 8s in circulation have been grounded following last week’s crash. A preliminary investigation cited similarities with the October crash of Lion Air Flight 610 and has fingered the Boeing’s onboard autopilot system as the culprit, raising questions regarding how the aircraft passed the Federal Aviation Administration’s safety certification tests and why pilots weren’t made aware of the glitchy software.


The FAA is accused of letting Boeing conduct many of the critical safety checks itself, while Boeing allegedly cut corners to rush the plane to market ahead of competitor Airbus’ hot new model. The oversight was compounded because many foreign regulators assumed the Americans wouldn’t allow an unsafe plane in their airspace and only conducted the most perfunctory safety checks of their own.