Federal law enforcement has begun a probe into reports of drones flying over the US Department of Energy’s Savannah River Site in South Carolina. Nuclear waste is treated at the site, and nuclear weapons materials are stored and processed there.

Several sightings of unmanned aerial vehicles, or drones, over the Savannah River Site (SRS) have been reported by site security in the month of June, the US Department of Energy announced Thursday.

Monte Volk, a spokesman for SRS, told The State it is yet unknown who is behind the flights or why they are occurring.

“The protective force at Savannah River Site (SRS) has confirmed several sightings of Unmanned Aerial Systems (UAS) flying in SRS airspace in June. SRS takes these reports very seriously and is coordinating with appropriate federal, state, and local authorities,” the Energy Department said in a statement.

There is no “no-fly zone” over SRS, Volk told WRDW, though there are some altitude guidelines enforced by the US Federal Aviation Administration (FAA), which has cautioned drone pilots about flying UAVs in airspace around nuclear facilities and other protected areas. 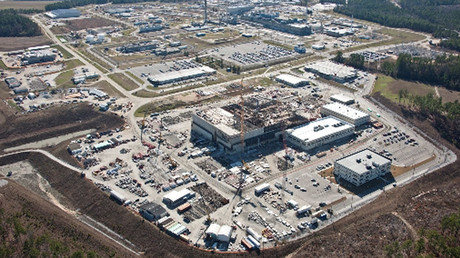 “Drones flying over any critical infrastructure, government facility, military base — with the environment we are living in today — would be a concern to law enforcement and homeland security officials,’’ Mark Keel, chief of the South Carolina State Law Enforcement Division, told The State. Keel added that the drone reports “have got our attention.”

“SRS processes and stores nuclear materials in support of national defense and US nuclear nonproliferation efforts,”according to the Department of Energy. “The Site also develops and deploys technologies to improve the environment and treat nuclear and hazardous wastes left from the Cold War.”

SRS contains the only facility in the US for “extracting, recycling, purifying and reloading” tritium contained in nuclear warheads and other materials. The Savannah River National Laboratory and the yet-completed Mixed Oxide Fuel Fabrication Facility, which will process“excess weapons-usable Plutonium to a form that can be used in commercial power reactors,” are also on the site.

A prominent activist and critic of the site told The State he had been interviewed by FBI agents about the drone flights. Tom Clements, of the non-profit group Savannah River Site Watch, said he has taken and published photographs of the site for years, but that those photographs were obtained using an airplane in full compliance with FAA rules.

“I know nothing about it,’’ Clements said of the drones. “I think (the agents) were not well informed about my organization or the situation.’’

He added that the agents inquired about the drone reports at “valid requests of SRS security personnel.”

South Carolina is currently suing the Department of Energy over its handling and construction of the Mixed Oxide Fuel Fabrication Facility, which was approved by Congress in 1998. The site has been part of a 2000 deal between the US and Russia in which both nations agreed to dispose of 34 tons of plutonium. Yet since that pledge, the mixed oxide facility’s costs have ballooned while delays have pushed its completion to a date unknown.

In August 2015, SRS was briefly placed on lockdown after indications of the presence of potentially explosive residue. Ultimately, no explosive material was found, according to the Energy Department.

The FAA, meanwhile, is working to open US skies to more unmanned drones. The agency recently released its initial drone rules for commercial flights. Beginning in August, commercial enterprises will be allowed to fly small, remote-controlled unmanned aerial systems (UAS) to conduct routine flights in accordance with public safety and national airspace rules, and without special permission from the federal government.

Like operators of hobby drones, commercial drone pilots must keep their UAS within sight. Registered, security-cleared operators at least 16 years of age will be required to keep drones away from airspace where people are directly below, away from the underside of covered structures, and below 400 feet (122 meters) in altitude. Drones must also stay at least 400 feet away from a building or tower.