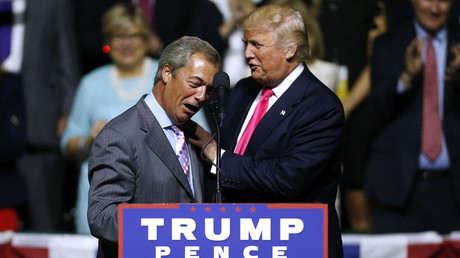 Ex-UKIP leader Nigel Farage has been slammed for condoning Donald Trump’s ‘zero tolerance’ immigration policy which saw the separation of thousands of children from their families at the US-Mexico border.

Farage encouraged his Republican pal across the pond to pursue his so-called ‘zero-tolerance’ policy, that was introduced by US Attorney General Jeff Sessions. The policy saw several thousand children separated from their parents who were being prosecuted for illegally crossing the US southern border.

Despite widespread criticism of the policy, the Brexiteer told Fox News on Wednesday: “It’s very easy to be compassionate but you’ve got to understand in the case of America and these borders, many of these children are actually being used as a means to get other people in, many of who aren’t even their families.

“Trump has got to stay tough on this and ignore all of the screams coming from the liberal media.”

One caller on Farage’s own LBC show was so outraged at the former UKIP leader’s support for Trump’s “lies” that he slammed him as a “disgusting human being.” While on Twitter prominent political commentators, entertainers and politicians weighed in.

A fuming man got himself so worked up over Nigel Farage’s long-time support of Donald Trump, he ended the call by branding him a “disgusting human being” https://t.co/qiru66RqPP

After scrolling through my timeline and seeing Farage, Morgan, Trump, Sugar, Pepe, I need to see something nice to remind myself that humanity isn’t doomed. How do I see that Bob Mortimer and Paul Whitehouse fishing show from Australia?

The screams reverberating around the world are coming from terrified children in cages. What you’re saying here is that you believe child abuse should be a legitimate tool of the state. https://t.co/MsQBImFc5n

Following the outrage, Trump bowed to international pressure to scrap the policy saying he had been swayed by heartrending images of children being torn away from their parents. The president signed an executive order allowing families to be detained together.

It is still unclear what processes are in place, if any, to reunite the thousands of children who have already been separated from their parents or what new procedures on the border will entail.