Nigel Farage has been scolded for likening members of the European Parliament to the “mafia” holding the UK “hostage.” The former-UKIP leader made the scandalous remarks while the legislators were meeting to draft guidelines for Brexit negotiations.

Acknowledging that there are “national sensitivities” connected with the word “mafia,” Farage then went on to brand MEPs “gangsters” instead.

Speaking in Strasbourg, where the Parliament had convened to draft “red lines” for Brexit negotiations, Farage said: “You are behaving like the mafia.

“You think we are a hostage. We are not, we are free to go.”

He said that after Prime Minister Theresa May triggered the official two-year exit process under Article 50 last week, the EU’s response had been “all too predictable.”

The demands being put forward by the bloc are not only “unreasonable,” but also at times “impossible” for the UK to accommodate, he added.

Farage also slammed suggestions that the UK may have to pay a divorce bill of £52 billion.

“You began by telling us that Britain would have to pay a bill. A cool 52 billion sterling, a figure that has clearly been plucked out of the air, effectively a ransom demand.

“What you could have done is acknowledge that we have put net over 200 billion sterling into this project, we’re actually shareholders… and you should be making us an offer we can’t refuse – to go,” he said, while calling the EU’s divorce demands “vindictive and nasty.”

“All I can say is thank goodness we’re leaving,” he said.

Farage also warned EU officials against settling Brexit terms without signing a new trade deal, claiming hundreds of thousands of EU jobs could be in jeopardy, while the UK would survive.

“If you wish to have no deal, if you want to force us to move from the table, we will.

“There are a lot of other people who will give that to us,” the Brexiteer said. 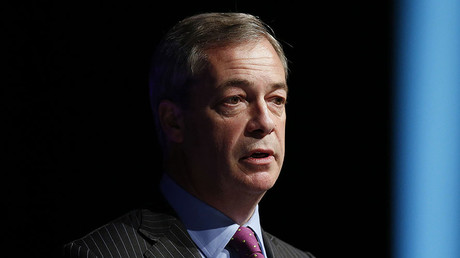 “You will hurt your people and your companies if you continue down this route,” he warned.

If the EU maintains its current attitude, more countries will seek to leave the bloc, he argued.

Meanwhile, the EU Parliament’s lead Brexit negotiator, Guy Verhofstadt, called the UK a “sick” country, saying the bloc’s relationship with Britain was “never easy” and, perhaps, “never meant to be.”

“Let’s not forget, Britain entered the union as the ‘sick man of Europe’ and thanks to the single market came out of the other side.

“Europe made Britain also punch above its weight in terms of geopolitics, as in the heydays of the British empire,” he said, while claiming that Brexit was merely the result of a “catfight in the Conservative Party that got out of hand.”

Verhofstadt also predicted that, one day, someone would come to terms with the UK’s “waste of energy, stupidity” and try to bring the country back into the bloc.

Nonetheless, he thanked Britain for its contributions and for being a “staunch, unmatched defender of free markets and civil liberties.”