Former UKIP leader Nigel Farage is part of a pro-Vladimir Putin “fifth column” attempting to “kill” the European Union, the EU Parliament’s chief Brexit negotiator said during a heated session of the body.

Guy Verhofstadt slammed Farage and others, including new Italian Interior Minister Matteo Salvini and Hungarian Prime Minister Viktor Orban, as “cheerleaders” of Russian President Vladimir Putin during a heated tirade at the European Parliament in Strasbourg.

Reacting to Verhofstadt’s speech, Nigel Farage tweeted: “This is a baseless lie. I have never received any Russian financial or political support. I suggest you withdraw.”

This is a baseless lie.

I have never received any Russian financial or political support.

I suggest you withdraw. https://t.co/jxb0YrrwVc

Verhofstadt said the EU is surrounded by a “circle of evil,” stretching from “Putin, Erdogan and – on a bad day, and that’s every day at the moment – even Trump.”

Turning to Europe’s populist right-wing parties, he added: “But our problem runs deeper than that, deeper than only foreign policy or external security. Europe has a fifth column in its ranks. Let’s be honest. 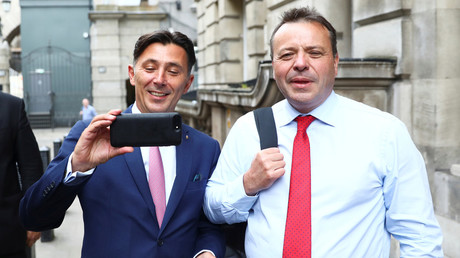 “Like Arron Banks, the good friend of Nigel Farage here, who colluded with Russians to make Brexit happen. Together with government leaders like Orban, Kaczynski, Salvini: these people have only one goal and that is to destroy Europe, to kill our liberal democracy.”

UKIP MEP Ray Finch hit back, accusing Verhofstadt of being a “conspiracy theorist.”

“EU federalist fanatic Guy Verhofstadt is just lashing out, incapable or unwilling to accept that the British people voted to leave the EU. Calling 17.4 million people ‘Putin’s puppets’ is so outlandish, I fully expect him to blame it on the influence of singer Iggy Pop or the lunar cycle,” the MEP said.

“He is an EU conspiracy theorist who deserves our pity. Funny he did not mention his great friend George Soros, who has publicly pumped billions into political campaigning.”